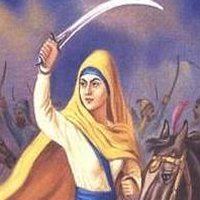 A young Sikh girl lay fainted from hunger, outside a strange house in a far-away land. The people of the household waited for her to finish her meal and come inside. When she did not appear for a long time, one of the servants went out. Noticing her lying on the floor, he thought she was pretending to be asleep and began to beat her. The shock brought the half-dead girl back to her senses. With a scream she got up on trembling legs and, shivering with fear and weakness, she managed to totter into the house. She was pushed into a corner where a pile of dirty dishes waited for her to clean. But she barely managed to get there before she fainted once again.

Just then a young boy, the son of the master, came running and began to play with the servants. When he saw Satwant Kaur lying in a corner and being beat by the servant, he ran across and, catching her hand, said, "Don't beat her!" Then he bent down and helped her to get up. Holding her hand, he took her into his room. He brought a bunch of grapes from the fruit bowl and pushing them into her hands said, "Dear sister, eat these and don't cry."

Then he went to his mother and told her about the servants beating the girl. The mother was moved and immediately ordered that Satwant Kaur should stay in her room, and take care of her and her son. She was no longer to be a part of the menial staff.

Satwant Kaur felt a little better after eating the grapes, but she was so worn-out emotionally and physically that she dropped off to sleep where she sat.

The next morning the child again brought some grapes and gave them to Satwant Kaur to eat. When the mistress realized that she would not eat the meat cooked in their home, she arranged for her fruit and gave her permission to cook her own food. She was also allowed to visit a sahajdhari family, who lived in the neighborhood.

Satwant Kaur thus became free from the servant's tyranny and her life became easier. But she not know the local language and was constantly afraid of displeasing her mistress and the young child. She did not, however, let this depress her and began to learn the language and soon became fluent in it.

The mistress of the house, Fatima, was a very unhappy woman. She had no living relatives. Her husband was notorious for his debauched ways and did not treat Fatima well. As a result, she was looked down upon by friends and relatives. Even the servants did not show her the respect due to her as the mistress of the house. Fatima became very irritable and frustrated. The only one to arouse any soft emotion in her heart was her son, Ghani, with whom she spent her most happy and joyful hours.

She noticed how loving and patient was Satwant Kaur, and became very fond of her. During her bad moods, she relied on Satwant Kaur's calm and untiring support, and gradually a warm companionship developed between these two women of different cultures and faiths.