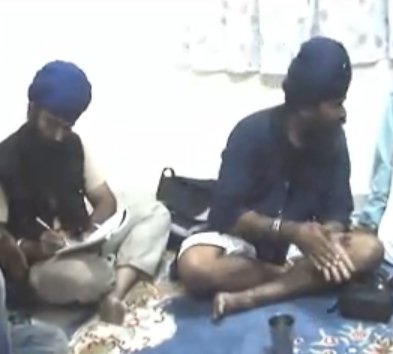 SRI HAZOOR SAHIB, Nanded (KP)--As originally reported on PW in December 2008, Sanatanist Nang Niddar Singh, the self-styled “Jathedar” of Budda Dal UK, who has misled countless Sikh youth in England for more than a decade, finally succumbed to Panthic pressure and apologized for his latest misdeed .

During the 300 years gurta gurgaddi divas celebrations at Takht Sri Hazoor Sahib, Niddar Singh, his associate Parmjit Singh, and other UK Nangs were challenged by Hazoori Singhs, Buddha Dal, Damdami Taksaal, and other Nihang Singhs from various Dals for publishing misleading and derogatory information in their newly released book.

In a video released last week, Niddar, in the presence of Singh Sahib Giani Kulwant Singh, is seen nervously pleading for forgiveness in front of dozens of Singhs in a room in the Hazoor Sahib complex.

At one point, the clearly tense Niddar is questioned by a young Nihang Singh about his belief that it is acceptable for bibis to do beadbi of their kes (hair), and for Sikhs to drink alcohol. He declined to answers the query of the Singhs, possibly fearing reprisals if he misspoke. Paramjit is seen sitting nearby preparing the apology statement that is to be read by them.

The sullied and visibly shaken Niddar, who in the past has been known for his flamboyant and outrageous comments, seemed to have met his match. Perhaps this is the first glimpse of the real Niddar. For the past few years, he had been continually boasting that there was no one who could match his superior knowledge on Sikhi and martial-arts training in his so-called “hadd-torr gatka.” He mocked others as “British nurtured” fakes, and promoted his line of thinking as the original “Sanatan Sikhi.”

All that bravado of the past seemed useless now. Niddar, possibly out of fear for his safety, momentarily came to his senses, and eventually, apologizes. He and Parmjit stood up in the Sangat, then read out a written statement expressing their regret for misleading the Sikh Sangat.

Their apology was followed by a roar of Jaikaras by the local Sangat witnessing this spectacle.