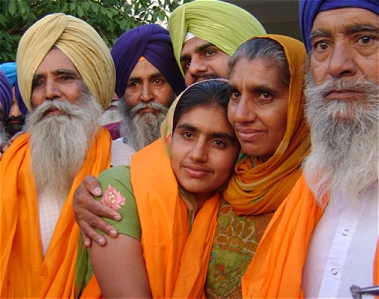 Bibi Parveen Kaur and family after her release from prison

AMRITSAR SAHIB (KP)--Prominent Panthic organizations expressed prayers of gratitude and ardas] after the release of Bibi Parveen Kaur, who was held as a political prisoner by the fascist machinery of the Punjab and Haryana Police. Bibi Parveen Kaur was arrested in March of last year by the Punjab Police under the command of the present Akali Government in relation to a baseless case fabricated by the Haryana Government. The Sikh community has been campaigning for her unconditional release since she was taken into custody.

The case against Bibi Parveen Kaur remains pending, but her release on bail has led her family to finally breathe a sigh of relief. At the age of 19, Parveen Kaur's arrest last year was highlighted in an alleged attempt to assassinate Gurmeet Ram Rahim, head of the Sacha Sauda cult. As per usual practice with political prisoners in India, she was quickly labelled a terrorist by the government. However, as published by the Panthic Weekly previously, it was nothing that Parveen had done--in fact, it was the background of the family that she comes from.

Background of Bibi –The cause of her arrest

Bibi Parveen Kaur comes from a meek but extraordinary family. As with many Sikhs, her family converted to Sikhi from Islam--not centuries ago, but very recently. It was barely twenty years ago when her uncle Bashir Mohammed turned Lachman Singh gave up his job as a Punjab Police cop and joined the Babbar Khalsa and served under the leadership of Shaheed Bhai Sukhdev Singh. Bashir’s job was initially to spy on the Jathebandi based in Pakistan, but after coming in contact with the genuine Gurmat based righteous lifestyles of Singhs, Bashir could not resist adopting the way of life bestowed by Guru Gobind Singh Ji.

Bashir’s honest involvement in the Jathebandi led to many Panthic victories during the 80s and 90s and consequently led to the downfall of the Punjab’s Nazi regime of that time. Bashir spearheaded many campaigns and brought to justice genocidal individuals who had illegally and immorally caused the deaths of thousands of innocents. It was due to the growing influence of Lachman Singh that led Sikhs, Hindus, Muslims and others to truly dwell in peace despite the horrendous activities of the Punjab Police.

Obviously the growing popularity of Lachman Singh did not earn a great place in the wicked minds of Punjab Police officials. Sukhdev Chahal, a DSP in Punjab, was especially not gratified by the growing peace in Punjab as he was the one who supervised Bashir’s activities when initially hired by the Punjab Police. Growing rancor consequently led to the bloody murder of Lachman Singh in a brutal manner when he, along with his wife and unborn child, were murdered in their sleep by a troop of policemen in Calcutta.

As the incident had taken place outside of Punjab, several newspapers highlighted the unjust action by the Punjab Police in its true light. Punjab Police’s true face was exposed in front of the mass media, which also led to the arrest and dismissal of many officials. However this did not satisfy or hide the thirst for blood of the main culprits as they continued their oppression, especially targeting family members of Bhai Lachman Singh and family members of Jathebandi Singhs.

Thankfully for both of these organizations, the epic of true Panthic demonstration was halted, but the legacy the freedom fighters left behind has continued to haunt these men even today. As stated inside Gurbani, the ‘kooreyaars’ (wrong-doers) mingle and continue to spread. After the early 1990s, there has been a rise in cults and deras in Punjab--supported by both Shiromani Akali Dal (B) and Congress. The same organizations once again came forward to save the Sacha Sauda cult of Sirsa when Sikhs and other communities came out into the streets to protest against Ram Rahim’s activities.

It is possible that the concern of anti-Sikh organizations is not the dera itself, but the large bank of votes that comes along with it. To win the support of the cult's followers, both parties have tried to express their support in different forms. Badal, being in control of Punjab, currently has left no stone unturned as his party has favoured arrests and even murders of innocents to gratify the Dera officials. The story of Bibi Parveen Kaur is the same with Badal and the Congress having picked old wounds to satisfy new lords.

Bibi Parveen Kaur was a regular 19 year old college student when she was picked up and put behind bars in a fabricated case. Despite being held for over one year, she did not come under the impression of falsehood. Her struggle for justice included several hardships and days of hunger but she did not incline to commit any dishonesty to save her from the hardships.

The same spirit was demonstrated by Bibi Parveen Kaur in all her court hearings. After finally being released, Bibi Parveen Kaur reached Sri Darbar Sahib (Amritsar) and Akal Takhat Sahib to offer her ardas along with her family members. She was joined by several other eminent leaders of various organizations. She was stopped at various villages by local residents to honour her for her courage and Panthic dedication. Bibi Parveen Kaur also paid obeisance at various other Gurdwara Sahibs.

In an interview with the press, Bibi Parveen Kaur labelled the time spent in prison as “unforgettable memories.” She shared some of the hardships faced in jail, at the hands of the police. As Bibi Parveen Kaur is free from the shackles of crooked cops and political prison, the Panth needs to unite to ensure her case is fully withdrawn and an apology is tendered. At the same time, we should not forget that six other innocent Singhs are still being held in the Haryana based Karnal Jail in the fabricated case by the Punjab and Haryana Police.