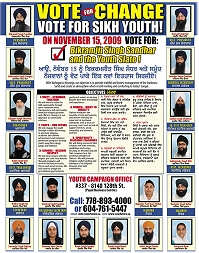 Surrey, BC - On Sunday, November 15, 2009, Sikhs in BC received the answer to the question they have been asking for years, "When will we re-unite?" In what experts are calling a turning point in the history of Sikhs in North America, Bikramjit Singh Sandher and the Sikh Youth slate defeated the incumbent regime in the executive election at Surrey's Guru Nanak Sikh Gurdwara. In the official results, the Youth Slate received a total of 13, 458 votes, while the incumbent slate received 7, 257 votes. With an almost 2:1 ratio of votes for the youth, the Sikh community has loudly indicated their desire for a positive change.

Large, energized crowds gathered throughout Surrey late Sunday night into Monday morning, letting out a collective sigh of relief when reports circulated that the Youth slate was victorious. As the news sunk in, people from all political backgrounds flooded the Youth campaign office with congratulatory phone calls.

Standing amongst a crowd of supporters, president-elect Bikramjit Singh re-affirmed the message that the community had already conveyed, "The time for change has come. The sangat has spoken loud and clear: they want Gurdwara management that speaks to the real issues our community is facing today. We must all join together to save our children from drugs and gangs, to provide support and equality to women, and to ensure the best services for our seniors. We must renew our mission to serve all of humanity now that we are united."

A true testament to their dedication, the Youth Slate fought a hard but respectful election campaign. Numerous attempts to engage them in dirty politics were instead met with logic and respect, a philosophy that did not go unnoticed by the community at large. "My mind was set on voting against the Youth slate, until I saw their demeanor and the purity of their message" said one voter, "I realized that I myself needed to rise out of the political rut that I had been stuck in for years and look at the bigger picture".

The Youth Slate, in an impromptu rally in Surrey on Sunday night, also thanked the hundreds of volunteers who spent countless hours throughout the campaign to help achieve this great moment. "Without the help of the volunteers, we would not be celebrating right now," said Bikramjit Singh. "Know in your heart, that your hard work has helped write a page in history!"

It now remains to be seen whether the outgoing management will give charge of the Gurdwara Sahib to the youth slate or continue to drag out the process in courts as they have done for the last 3 years. In the 2008 election, the Sikh Youth won by over 5,000 votes and was unable to serve due to small technicalities. Despite the delay, and despite the different opposing groups uniting to fight this tide of change, the community gave an even larger margin of victory to the Youth Slate this time around -- a clear call for a new path of peace and unity among Sikhs in BC.

Change has arrived and it is being met with tremendous optimism. For the first time in decades, the Sikh community of Surrey has a Gurdwara that they can call their own: A place where people from all walks of life can gather to worship, learn and serve; a place where political affiliations get left at the door; a place that fosters love and harmony; and a place that everyone can feel welcome.


Please note, Pathic.org is not responsible for the contents of the press releases published on this site.
Press releases are provided as a public service only.