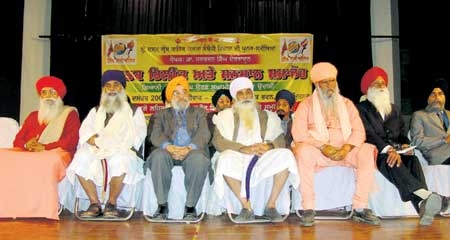 Amritsar Sahib – At a large gathering of Sikh religious scholars and intellectuals, an open challenge was given to the anti-Dasam Granth heretics around the world for a face-to-face discussion on Sri Dasam Granth, at any venue or time within the next 30 days.

The organizers also announced the formation of “ਸ੍ਰੀ ਦਸਮ ਗ੍ਰੰਥ ਪ੍ਰਬੋਧ ਸਭਾ” (Sri Dasam Granth Awareness Organization) whose primary aim would be to promote the awareness of Sri Dasam Guru Sahib Ji’s sacred Bani that is enshrined in the Dasam Granth, and provide any befitting response to Guru-Nindaks that oppose the Sikh scripture.

The organizations declared that Sri Dasam Granth was a key sacred Scripture of the Panth and no one should question the validity of its contents. They openly challenged the anti-Dasam Granth lobby to a face-to-face discussion, and gave them a thirty day ultimatum at any venue. However, if they do not hear back from the anti-Dasam Granth lobby, the organizers announced that they would set the time and venue themselves and invite the detractors for a frank and open discussion.