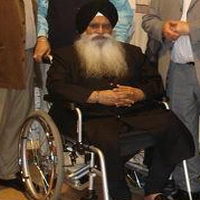 Just days before the infamous Raag is scheduled to appear before the five Singh Sahibans at Sri Akal Takht, and provide explanations for his blasphemous statements, the heretic continues to dupe and mislead the the Sikh Sangat on a daily basis. The Ragi has declined to appear at Sri Akal Takht again to explain his blasphemous statements and behavior. Meanwhile, the followers of the Raagi have bent over backwards for their master in trying to remove any evidence that might launch a desperate attempt to remove any audio/video evidence that could possibly hurt the Ragi and permanently ex-communicate him from the Panth.


Shocked with the Ragi's recent heretical statements, dozens of Sikh organizations and Gurdwaras in North America made an open appeal to the Sikh Nation to be vigilant against the anti-Panthic actions of the blasphemous Ragi and his Kala-Afghani cohorts. Furthermore, the organizations requested the Sikh Panth to discipline the Ragi for condemning and rejecting the sacred Nitnem Banis, the practice of the Amrit-Sanchar, and the Sikh Ardas by calling it devi worship.

On November 17th, the Ragi was directed by Sri Akal Takht Sahib to appear before the five Singh Sahibans and provide explanation for the offending remarks he had made about Sri Guru Gobind Singh Ji at a Rochester, New York gurdwara..The directive by Sri Akal Takht Sahib also declared the Ragi as a “Guru-Nindak” who, due to ego and self-interest, failed to uphold the respect and maryada of the sacred Takht Sahib.

Through a collaborative effort and sufficient evidence, the North American Sikh Sangat was able to convince Sri Akal Takht that Raagi has continued to propagate his manmat philosophy. Thus, the five Singh Sahibans issued an edict from Sri Akal Takht Sahib declaring the controversial Ragi Darshan Singh a ‘Tankhayia’ (apostate). The Ragi was sternly chastised for failing to appear at the apex Sikh Takht at 12 noon on December 5th of 2009 as required. Raagi failed to appear before the Sri Akal Takht because he knew the evidence was highly in favor of his ex-communication. Thus he was trying to gain more time to change, and delete his previous statements.

It appears that followers of the pseudo scholar have attempted to remove all evidence of the Guru-Nindak. Recently followers of the pseudo scholar tried to remove all videos from you tube which were posted by the website Patshahi10.org and Panthic.org. However, both sites have managed to preserve this evidence for the benefit of the Sikh Sangat which can be viewed at the respective sites. Followers of the Guru-Nindak have also made attempts to shut down sites, including Panthic.org citing copyright violations on the audio/video material, but they have not made any success in doing so. Panthic websites will continue to expose Guru-Nindaks /Government sponsored Agents.

Audio and Video Evidence agains the Ragi is still preserved at: http://www.panthic.org/articles/5177 and http://www.patshahi10.org.

The infamous Raagi has a reputation of going back on changing, and deleting his previous statements. The truth of the matter is the manmukh Raagi will do anything that favors his political career. During the turbulent times post Operation Blue Star the Raagi appeared to be a staunch supporter of an independent Sikh State and he would often refer to the Gurbani of Sri Dasmesh Pita Ji as a tool in his speeches. However, now he has completely rejected the concept of a Sikh State and has made blasphemous remarks directed towards the Gurbani of Sri Dasmesh Pita Ji.

It appears that the Raagis true motives are only to undermine the Sikh leadership and create chaos. The raagi has never had any sincere interest in serving the Panth. He only hopes to gain controversy, collect followers, and confuse the Sikh Sangat.

It is a well known fact that the Ragi walked away from his Panthic commitments and promises during the late 1980’s, see: http://www.panthic.org/articles/5193 (RAGI DARSHAN SINGH - A TRAITOR AMIDST THE SIKHS). Due to these misdeeds, he will never be honored in this world or the next.