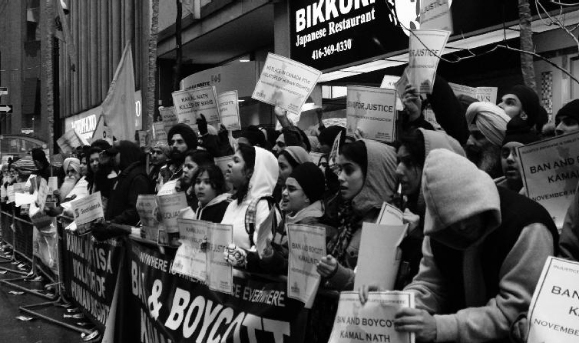 Toronto, Ontario (KP) - Members of Toronto’s Sikh community held an impressive protest rally at Parliament Hill on Tuesday against India’s Minister of Road Transport and Highways, for his involvement in the Novembers 1984 anti-Sikh pogroms in which thousands of Sikh were massacred.

As Kamal Nath attended the Canada-India Business Council meeting at the King Edward Hotel on King Street, a large group of protesters lined the streets to express their outrage and opposition to his visit.

The demonstrators, comprising of the and old, shouted "Kamal Nath, Go Back!“ and "Kamal Nath, Killer of Sikhs” and expressed their dissapoinment at the Canadian Government for allowing entry to this controvercial figure.

Expressing sympathy with the Sikhs, the New Democratic Party leader Jack Layton, MP, in a letter urged his caucus not to attend any events with Kamal Nath.

“The voices of a great many Indo-Canadians from all across the country have been very clear: they are especially hust by the presence in Canada of a man who allegedly organized anti-Sikh pogroms.” stated the letter.

“Mr. Nath has been accused of participating in orchestrating, inciting and leading angy mobs in Delhi in November 1984. Over the past 26 years, the wounds of 1984 have not healed.” it adds.

PHOTOS OF THE EVENT: 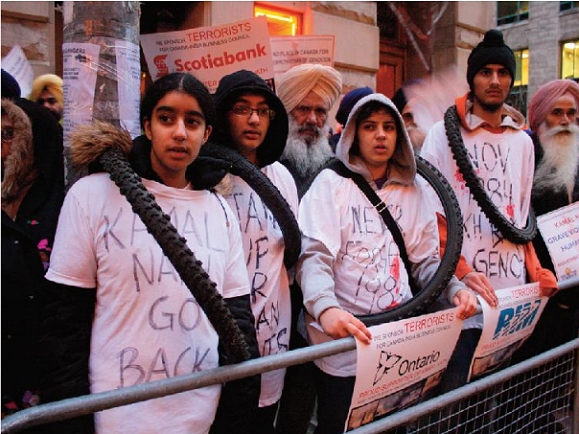