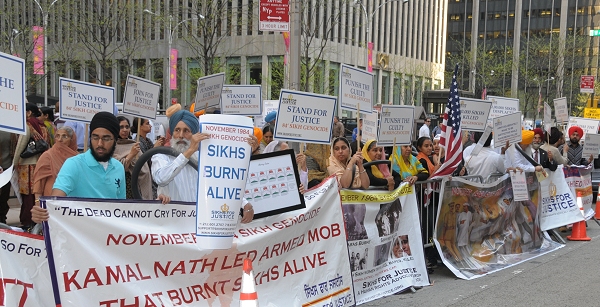 MANHATTAN (CN) - Sikhs who survived a 1984 massacre at a temple in New Delhi have filed a federal class action against a former member of the Indian parliament, who they say planned the riots and led a murderous mob. "In the four-day carnage, 3,000 Sikhs, men, women and children were killed in New Delhi alone while thousands were left maimed, wounded, raped and burnt," Sikhs For Justice and two survivors say.

"Shops, properties and Sikh temples were ransacked, looted and torched. As a result, more than 300,000 Sikhs were displaced."

The slaughter followed the Oct. 31, 1984 assassination of Prime Minister Indira Gandhi by her two bodyguards, "who happened to be Sikhs," according to the complaint.

Sikhs for Justice claims that Kamal Nath, then a member of the Indian Parliament, led a mob of 4,000 people at a historic Sikh temple, Gurudwara Rakab Ganj Sahib.

Plaintiffs Jasbir Singh and Mohinder Singh say 24 members of their family were killed by the mobs and their home was burned during the first week of November 1984.

The class claims that members of Parliament and senior members of the Indian National Congress planned the massacre on the night of Gandhi's assassination.

Outside the Rakab Ganj temple, the mob captured Ajit Singh and his son, both Sikhs, "and burnt them alive in broad daylight in the presence of thousands, including the defendant," according to the complaint.

Witness testimony put Nath at the site of the Singhs' execution, leading the mob, though Nath told the Justice Nanavati Commission he thought Hindus were being held hostage in the temple and tried to disperse the crowd, according to the complaint.

The commission found Nath's testimony "vague," a "little strange" and inconsistent with other reports, but formal charges were never brought, the complaint states.

"After more than 25 years of massacre, the Indian government and its prosecuting agencies have failed to prosecute and convict a single leader who was responsible for widespread killings of Sikhs," the complaint states.

The class seeks compensatory and punitive damages, alleging crimes against humanity and wrongful deaths. It is represented by Avtar Singh.

Sender IP identification :3.214.224.224
By clicking on the 'Submit' button, you agree to the following conditions: