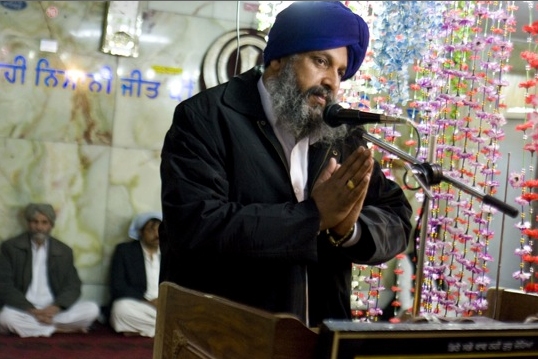 For many years, Sikhs were a prominent part of Kabul’s commercial scene, occupying prominent positions as traders, entrepreneurs, and, later, currency exchange specialists. But in today’s Afghanistan, many Sikhs find themselves marginalized and struggling to maintain their distinct cultural profile in Kabul.

Before more than three decades of nearly uninterrupted strife began with the 1979 Soviet invasion, an estimated 200,000 Sikhs lived in Afghanistan, many of them concentrated in the capital. Although Sikhs escaped the level of violence experienced by Hazaras during the Taliban era, many Sikhs nevertheless came to feel unwelcome and left the country. According to one estimate, only 170 Sikh families now remain in Afghanistan.

Senator Avtar Singh, the only Sikh in Afghanistan’s parliament, says that trying to raise awareness about the problems facing the country’s Sikh community is difficullt.

Maintaining cultural traditions has grown increasingly problematic. For example, how to ensure the dead are cremated, as mandated by Sikhism, remains an unresolved issue. Muslims now live on the land where Kabul’s Sikhs previously performed their cremations. "That land belonged to use for 120 years, and now we are forbidden to use it," Singh said.

Further complicating the lives of Afghanistan’s Sikhs is the lack of housing and educational facilities. "We have no space to live," Singh asserted. "We also don’t have enough schools for our children."

The center of cultural life for Afghanistan’s Sikhs is the gurdwara, or temple, in the Karte Parwan neighborhood of Kabul. For the past several days, the temple has been the scene of an unfolding human drama: over 100 laborers from India have been living in the gurdwara’s basement as they search for the means to get home. They traveled to Afghanistan in search work. But the jobs that they thought they were getting never materialized. Employment agents from the United Arab Emirates reportedly confiscated their passports on other travel documents and never returned them, and most don’t have enough money to make it home on their own, according to Indian press reports. The Indian Embassy is reportedly working to arrange transportation for the stranded workers.

The plight of Afghanistan’s Sikhs was evident last November 2, when the community celebrated the birthday of Guru Nanak, the founder of Sikhism. The holiday is considered one of the most sacred in the Sikh calendar, but in recent years the celebration in Kabul has been scaled back so as not to attract too much attention. "What this celebration was like before and what it is now-this is a big change I’m seeing. I wondered to myself, what will happen to our community?" Singh said.

Singh indicated that new battles for Afghanistan’s Sikhs are looming. "A new urban plan for the city will require it [the temple] to be demolished, along with a shrine to Guru Nanak that we’ve been hoping to repair after being damaged during Afghanistan’s three decades of war," Singh said.