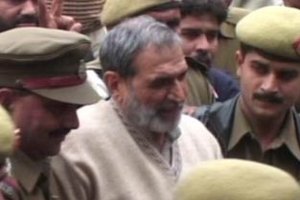 The court said that the charges under Sections 302 (murder), 395 (dacoity), 427 (mischief to property), 153A (promoting enmity between different communities) will be framed formally on May 18.

The framing of charges will pave the way for trial in the case. The Delhi High Court had earlier issued direction to complete the trial within six months of cases relating to anti-Sikh riots.

Sajjan Kumar, Khushal Singh, Girdhari Lal, Balwan Khokhar, Mahender Yadav, Maha Singh, Capt Bhagmal, Santosh Rani and Krishna Khokhar were named as accused in the murder of five people in Delhi Cantonment in the riots that followed the assassination of then prime minister Indira Gandhi by her Sikh bodyguards.

The Central Bureau of Investigation filed a chargesheet against Sajjan Kumar and others in two cases for allegedly instigating mobs during the riots, in which more than 3,000 Sikhs were killed across Delhi.