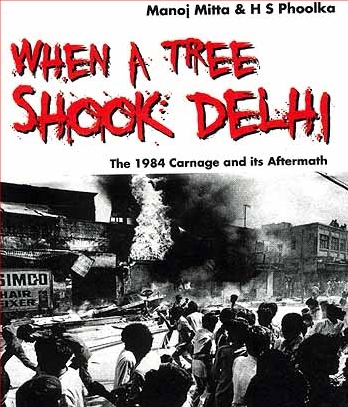 SURREY – A heavy hitter in the Indian media is in Surrey Friday night to cap off his Canadian tour in a quest for justice for 2,733 Sikhs who were massacred in Delhi in 1984.

Manoj Mitta, a senior editor with the Times of India, was invited by the World Sikh Organization to discuss a book he co-authored with Indian lawyer H.S. Phoolka concerning the massacre. His speaking engagement is at the Grand Taj Banquet Hall in Newton at 7:30 p.m.

Mitta, who is not Sikh himself, specializes in legal and public policy issues at the Times, which has a circulation of roughly 10 million and is considered to be the largest circulated English newspaper in the world.

His book is called When a tree shook Delhi: The 1984 Carnage and its Aftermath. Since its publication two years ago, Mitta has addressed both the British and Canadian parliaments on the subject.

His passion is evident.

“The sheer gravity of what happened,” he started, cried out for such a book.

And that’s despite some 10 official inquiries to date, he noted.

Mitta says his book has “presented the big picture – something the state is unwilling to do.”

It explores the 1984 anti-Sikh riots in Delhi, and their aftermath. The carnage lasted for three days, after Indian Prime Minister Indira Gandhi was assassinated by two of her Sikh bodyguards in retaliation for Operation Bluestar, in which Gandhi ordered the Indian army to attack Sikh militants in the Golden Temple in Amritsar. The violence ended with Ghandi’s cremation. Later, her son remarked of the events, “When a big tree falls, the earth is bound to shake.”

This, of course, provided the name for Mitta’s book.

“The book is essentially about impunity,” he explained. “We (India) came to be the world’s largest democracy and this is a test case of commitment to the rule of law. Something of this magnitude could take place in the capital of our country and we have no justice to show for it. None of the culprits, perpetrators, have so far been convicted. So, how did that happen? What led to this kind of impunity?”

“There is a lot of emotion in the minds of people that the thing happened, but they never had facts, they never had the actual details, and this book served that purpose, filled that very important gap. There was a need for people to be armed with information.

“It was also meant to serve the purpose of helping break this pattern of sectarian violence that is there in India,” Mitta said. “The fact that the culprits of ’84 got away provoked further rounds of sectarian violence in ’92, 2002, 2008. Other communities were affected – Muslims and Christians in the last instance. We believe had they done justice in ’84, perhaps these subsequent rounds of violence would not have happened.”

“People have very little idea of how something of this magnitude could have happened right in the capital.”

Despite an apology issued in 2005 by Indian Prime Minister Manmohan Singh – who is, notably, a Sikh – Mitta contends that the Indian government still “has not rendered justice” to the victims and remains in a “denial mode”

“They are not observing the 25th anniversary of the massacre, they are only observing Indira Ghandi’s assassination,” he said.

Mitta wants to see a museum built in Delhi to commemorate the massacre.