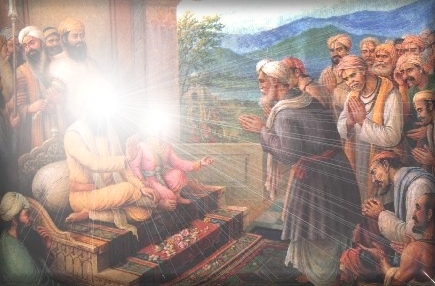 BACKGROUND AND ATROCITIES OF AURANGZEB

When the Mugal emperor, Aurangzeb occupied the throne in 1659, he began to order the demolition of all the Hindu temples, and ordered that, Hindu scholars should study in Islamic schools and mosques. A special department was formed for the massive conversion of Hindus into Islam. Auragzeb was so intolerant that apart from Hindus and Sikhs, he could not tolerate even those sects of Islams like Shia and Sufi etc. who had different opinions. He began to oppress them as well. Aurangzeb feared that all the non-Islamic provinces of India would continue to pose a threat to the Moghul Empire. So he wanted to convert them also into Islamic provinces. By that time, only the regions of Assam, Bengal, Maharashtra and Rajasthan were in the Aurangzeb's empire. But he wished to convert the whole of Kashmir into Islamic state first. Then, he started eyeing Punjab.

Thus, by the order of Aurangzeb, and by the power of sword, Sher Afghan Khan began to terrorize Kashmiri Pundits in order to convert them into Mohammedans. Kashmiri Pundits reached Anandpur Sahib and appealed Guru Teg Bahadur Sahib to protect them. Guru assured them that they had come in the Nanak's court. Hence, he would definitely save their religion and protect their life. When Guru Teg Bahadur Sahib's son Gobind Rai Ji came to know these things, he said to his father: "Father, it is our duty to help them." Gobind Rai Ji's words motivated Guru Teg Bahadur Sahib to go to Delhi at once and give supreme sacrifice.

Guru's preaching brought a new awakening in the masses. A new enthusiasm appeared in the people to fight against oppression. Aurangzeb was in Hasan Abdal then. As soon the matter was reported to him, He could not tolerate ond ordered for the Guru's immediate arrest. Subsequently, Guru Teg Bahadur Sahib was arrested in Agra and brought to Delhi. There the Guru parted with the three accompanying Sikhs Bhai Jaita Ji, Bhai Guruditta Ji and Bhai Dayala Ji, so that they could keep informing Gobind Rai of the events taking place in the town. After his arrest Guru, Teg Bahadur suggested Kashmiri Pundits to inform Aurangzeb that if the Guru accepted Islam, all the Hindus of India would accept Islam without any condition.

Then Kazis began to lure and tempt Guru Teg Bahadur Sahib so that he could accept Islam. But he replied: "My thoughts are far above than honour, respect, wealth, property etc. I have no greed for wealth, there is sufficient for me in the Guru Ghar.

When all the temptations to impress the Guru failed, the Kazis said that either Guru should accept Islam or perform a miracle. If he could not do either of these two things, said the Kazis, then the Guru should be ready to face death.

Guru Teg Bahadur Sahib plainly refused to give up his religion and showing miracles was unbecoming of a Sikh Guru. Akal Purakh has empowered Guru for the help of poors and needy, and not for showing miracles, Servants of God do not look good when they show miracles. It is a violation of God's dictat. "We are ready to give our heads, because we have arrived here to give up our heads," asserted the Guru. 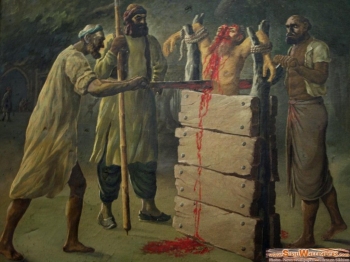 With an intention of terrorizing Guru Teg Bahadur Sahib and loosen his firm determination, Moghuls decided to kill Bhai Matidas first. Hearing the order of the qazis, Bhai Mati Dass prayed to the Guru, "O True King ! bless me so that I may do my duty by sacfiflcing myself for the glory of the faith." After the Guru had blessed him, the qazis asked Bhai Mati Dass, "Brother, embrace Islam and enjoy the pleasures provided by the goveInment. Moreover when you die as a Muslim, you will go to heaven where there will be streams of milk, many kinds of wine to drink and beautiful women to enjoy. If you do not embrace Islam, your body will be sawn into two." Bhai Mati Dass replied, "I can sacrifice hundreds of such heavens for my faith. I don't need women nor wine. I see all the happiness in the path of my faith." After his refusal, the qazis asked him his last wish, to which he replied, 'When I am being cut with the saw, let my face be towards my mentor so that I may behold my Guru till my last breath and he may keep on seeing me so that he may be convinced how happily I reach my last destination." By the order of the qazis, the executioners sawed Bhai Mati Dass in two on the 8th November, 1675 A.D., in Chandani Chowk, Delhi. 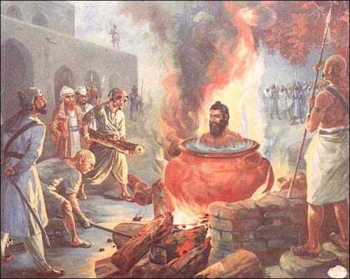 On the 9th November, 1675 A.D., the qazis ordered that Bhai Dayal Dass be seated in a cauldron of boiling water. On hearing the ruling, Bhai Dayal Dass asked leave of the Guru. The Guru said, "Brother, your service has borne fruit due to which your turn has come before mine. Great are you and blessed is your devotion. What pleasure can be greater for me than to see my lifelong devotees sacrificing their lives for the protection of human rights even ahead of me. May God bless you with success."

Before putting Bhai Dayal Dass in the cauldron of boiling water, the qazis said, "There is still time. Embrace Islam and save yourself from pains otherwise you will face greater agony than your companion. You have seen how cruelly he was sawn." Bhai Dayal Dass replied, "You could not harass my companion. Did you notice, how calmly he was meditating on the word of his Guru when he was being sawn. Having made mockery of bodily pains, he had diffused into the Supreme Being. Hurry up and let my soul attain unity with the Lord." On his reply in the negative, the executioners sat him in the cauldron of boiling water. He stayed on sitting in the water with an unwavering mind. His flesh separated from his bones and his soul merged into the Supreme Being.

There was panic all around after Guru Teg Bahadur Sahib's death. With the suggestion of a Banjara Bhai Lakhi Shah and Bhai Jaita arranged to take the head and the torso of Guru Teg Bahadur Sahib in their custody. Bhai Lakkhi Shah reached Chandni Chowk and carried Guru's torso in a bullock cart to his home three miles away. There, setting his house on fire, he performed last rites of the Guru. There exists a Gurdwara Rakabganj in New Delhi at the site of cremation.

On the other hand, Bhai Jaita found the head of Guru. he took the head and reached to Guru Gobind Singh at Anandpur Sahib. Guru Gobind Singh embraced him and said: 'Rang Rete Guru Ke Bete' (the true sepoys are the sons of Guru). At the place where Guru Teg Bahadur Sahib's head was cremated in Chandni Chowk, there exists Gurudwara Seesganj Sahib now.

Sender IP identification :54.80.249.22
By clicking on the 'Submit' button, you agree to the following conditions: