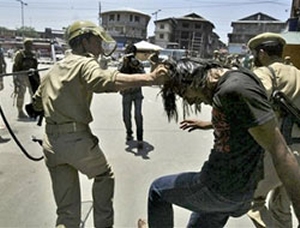 New Delhi: A leaked cable by the whistle blowing website Wikileaks on Friday revealed that 'India was systematically torturing civilians in Kashmir'. According to leaked cable on Wikileaks on its website and major international publications, the US officials in New Delhi Delhi were privately briefed by the International Committee of the Red Cross (ICRC) in 2005 that 'Indian security forces were using methods including electrocution, physical beatings and sexual interference against hundreds of detainees'.

In a detailed report back to Washington they recorded the view of the ICRC that India “condones torture” and that the detainees were not Islamist insurgents or Pakistani-backed militants, who were “routinely killed.” Instead, they were civilians “connected to or believed to have information about the insurgency.”

According to the cables, the ICRC interviewed 1,296 detainees of whom 681 said they had been tortured.

Of those, 498 claimed to have been electrocuted, 381 said they were suspended from the ceiling, and 304 cases were described as “sexual.”

A total of 294 described a procedure in which guards crushed their legs by putting a bar across their thighs and sitting on it, while 181 said their legs had been pulled apart into the splits.

In one cable US officials reported that “terrorism investigations and court cases tend to rely upon confessions, many of which are obtained under duress if not beatings, threats, or in some cases torture.”

The cable summarizes the methods as such: