Amritsar Sahib (KP) - Despite the fact she has been the ਸਰਪ੍ਰਸਤ (chief patron) of Istree Akali Dal, controversy continues to hound the ex-president of the Shiromani Gurdwara Parbandhak Committee (SGPC), Jagir Kaur, this time over removal of facial hair.

Recently, Akali Dal (Delhi) representative, Jaswinder Singh Baliewal, accused Jagir Kaur of being a ‘patit’ (apostate) as he handed the media evidence that the ex-SGPC president has removed her facial hair and presented before and after photographs published on the official SGPC website
www.SGPC.net as proof.


According to an October 26, 2010 interview with the Chandigarh Tribune, Baliewal, alleged “She is patronizing beauty parlours where many such procedures are used to remove such hair. That is why there is a marked change in her facial appearance in the pictures”, and demanded that she be barred from taking part in SGPC elections due to this violation.

The All India Gurdwara Act prohibits SGPC members, candidates, and voters from participating in elections if they are in violation of the Sikh Rahit Maryda (code of conduct.)

The Sikh Rahit Maryada specificity prohibits removing hair either by plucking, cutting shaving, or other means. A Sikh who purposely removes hair from his body is considered a “Bajjar Kurehtee”, an apostate guilty of a cardinal sin.


The images below are from www.SGPC.net , the official SGPC website. The photos clearly show facial hair on the ex-SGPC president's face in older photos, yet they are mysteriously absent in her newer photos.

(Left, BEFORE, Right AFTER) 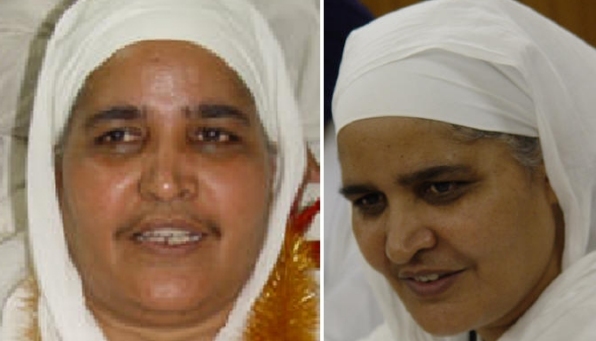 (Left, BEFORE, Right AFTER)

Adding to the controversy, allegations of Jagir Kaur's direct involvement in the abduction, forced abortion, and murder of her daughter, Harpreet Kaur, in April 2000 continue to resurface in media due to the ongoing murder investigation and trial.

The Punjab Newsline recently reported : “The ruling party in Punjab Shiromani Akali Dal (SAD), which finds its strength from 'Nanhi Chhan' programme, aimed to protect girl child has nominated 'tainted' Bibi Jagir Kaur as patron of Istri Akali Dal (Women wing of SAD) along with Finance Minister Upinderjit Kaur, though she is facing trial for the murder of her daughter.”

Interestingly, the Jathedar of Sri Akal Takht Sahib has suspiciously kept silence about the allegations against Jagir Kaur, despite various complaints that have been filed by Baliewal and others.

Harnam Singh Dhumma, the chief of the Damdami Taksal (Mehta faction), and Jasbir Singh Rode, the former Jathedar of Akal Takht Sahib, who have publicly declared to fully support and lobby for the ruling Akali Dal Badal candidates in the upcoming SGPC elections, are also keeping mum about Jagir Kaur’s transgressions. Both were unavailable for comment in regards to the above controversy.