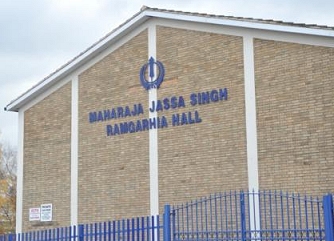 Birmingham, England (KP) – In attempts to rid UK Gurdwaras of anti-Sikh practices, and create awareness of Sikh Maryada and respect of Siri Guru Granth Sahib Ji, the Satkaar Committee and concerned members of the Sikh Sangat have taken positive steps to work alongside Gurdwaras. On 8th January 2011 positive steps were made by the Ramgarhia Sikh Temple Birmingham who announced a long term commitment to adhere to the Akal Takht Sahib’s directives on the issue of party halls.

In December 2010, attention was brought on the Maharaja Jassa Singh Ramgarhia Hall which is attached to the Ramgarhia Sikh Temple in Birmingham, and had allowed meat, alcohol and intoxicants on its premises. The Hall had been operating for the past 20 years. Like many other Gurdwaras across the UK, the Hall had been initially designed to cater for the ill-practices of the Punjabi community who wanted a venue to have parties to celebrate weddings etc, which contradicted Sikh Maryada.

The Ramgarhia Sikh Temple management committee confirmed that no future bookings will be taken for meat and alcohol parties. In relation to the existing parties that have been booked, the relevant families will be provided with the option of having a vegetarian, non-alcoholic party at the hall or having the party entirely cancelled with a refund of the initial deposit. It is hoped that current Halls owned by Gurdwaras can be used for promoting activities based on Sikh ethics, such as health, fitness, sports, Gatka and educational activities.

The only outstanding point is the situation where individuals may wish to make a new booking for the hall to be used for family parties which are vegetarian and non-alcoholic in nature, but do permit dancing. The Ramgarhia Sikh Temple management committee explained that such instances are likely to be few and far between. Satkaar Sevadaars had requested that these also be stopped in accordance with the 2006 Sandesh, but the management committee has said it is not yet in a position to agree to this due to the local situation.

The Satkaar Commiteee and the Ramgarhia Sikh Temple management committee have agreed that they will continue to work together on this issue and maintain an ongoing dialogue to reach the Gurmat-oriented solution. They also committed working with one another to propagate the Sikh message and ensure Gurmat flourishes in future generations.

In the meeting with the Ramgarhia Sikh Temple Birmingham, the Satkaar Committee fully condemned and criticized the use of threatening phone calls, abusive text messages, or knowingly spread false allegations against Gurdwara committee members on Internet forums (such as the President and General Secretary of the RST committee being alcoholics) on forums/public websites by any individual claiming to be promoting Sikh Maryada. Unfortunately there is no control over individual members of the Sikh community and their actions, however the Satkaar Committee urge all Sikhs, in particular youngsters to be respectful in the approach in any matter and that doing acts of aggression in the form of emails or messages is anti-Sikh and acts against the cause.

The Satkaar Committee and the Sikh Sangat would like to thank and praise the Ramgarhia Sikh Temple Birmingham committee for making positive steps in enforcing Sikh Maryada and hope that other Gurdwaras that have not yet complied to the Akal Takht Sahib Sandesh for any reason seek inspiration and guidance from such Gurdwaras.

Sender IP identification :34.205.93.2
By clicking on the 'Submit' button, you agree to the following conditions: