New Evidence of Mass Killings from Nov. 1984 Surface in Haryana 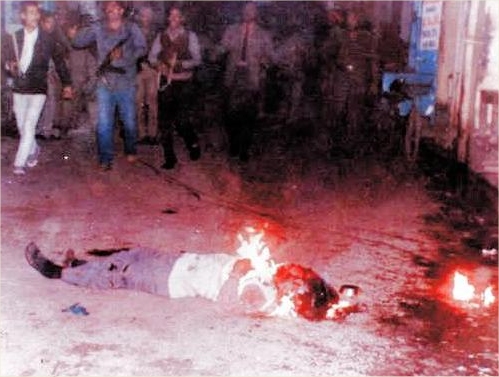 Chandigarh, Punjab - 26 years after Sikhs were killed in organized and systematic attacks across India, a crime scene consisting of a complete village of torched houses, burnt Gurudwara and scattered human bones was discovered at the site of village Hondh-Chillar, in District Rewari, Haryana.

In November 1984, the village was inhibited by more than 35 Sikh families and on November 02,1984 in an organized and well planned attack, the entire village was burnt along with its Sikh population and Gurudwara.

According to records of local police, an FIR was registered for the death of 20 Sikhs from Hondh-Chillar village on November 03 1984. The remains of Hondh-Chillar show that entire portion of the village where Sikhs used to live was torched including the Gurudwara. Human remains, mostly bones are scattered in the torched compounds. The Gurudwara of the village is completely burnt and is inhibited by stray animals.

It is estimated that 60 to 70 people living in the village would have died on the fateful night but the Haryana Police neither identified the 20 people killed as mentioned in FIR nor pursued the case to identify and nab the culprits. Haryana Police in fact chose to abandon the case midway.

The Sikh families of the village had come from Mianwali (now in Pakistan), during partition of the country in 1947. Such was the influence and goodwill of these families that one of their representatives Sarup Singh s/o Tirlok Singh remained a Sarpanch of the joint Panchayat of village Hondh-Chillar for 15 years. The fact proves that the Sikhs had good relations with the village people. Sarup Singh remained Sarpanch being the Sikh Community a minority in the village.

AISSF and Sikhs for Justice (SFJ) who has been assigned by Sri Akal Takht Sahib to work on the issue of November 1984 Sikh Genocide, announced that the site will be preserved as “Sikh Genocide Museum” and will serve to show the pattern of attack on Sikh localities across India during November 1984.

According to Karnail Singh Peermohammad and Davinder Singh Sodhi,, Secretary General – AISSF who visited the village alongwith Engineer Manvinder Singh Giaspur and some other Sikh leaders, said the burnt village is an irrefutable piece of evidence that in November 1984 Sikhs were subjected to genocidal attacks across India and their whole localities like village Hondh-Chillar were wiped out. The village will serve as a “sample of evidence” to show the world how Sikhs were subjected to genocidal attacks, locality after locality and village after village across India, added Peermohammad.

The team which went to the village found that on November 2, after the killing of former Prime Minister, Indira Gandhi a truckload of people came at about 11 am in the village and tried to attack the families but were persuaded by village elders including the Sarpanch of the Village not to do so. However, the FIR in this case, quotes Sarpanch as saying that in the evening three truckloads of people came shouting slogans with arms and petrol etc. and burnt the entire village to ashes. Women folk were raped and then murdered. Those who tried to flee were hit and done to death.

This genocidal site and FIR was discovered by the sustained and unceasing efforts of Engineer Manvinder Singh Giaspur. Initially, Manvinder Singh contacted SGPC President Avtar Singh Makkar for help in bringing this enormous Sikh Genocide evidence to the light but SGPC refused to intervene. After being disappointed from SGPC, Manvinder then contacted AISSF and SFJ to bring the Sikh Genocide site before the world.

Peermohammed announced holding of Akhand Path at the site of Gurudwara village Hondh-Chillar in the memory of innocent Sikhs who were burnt to death in village Hondh-Chillar on November 02, 1984. Bhog of the Akhand Path will be held on Sunday March 6th, 2011. AISSF and SFJ requested Giani Gurbachan Singh Akal Takht Jathedar to lead the Bhog ceremony as head of Sikh community. AISSF appealed Damdami Taksal, SGPC, Akali Dal Panch Pardhani, Khalsa Action Committee, Dal Khalsa and Sant Samaj to participate in the Bhog at village Hondh-Chillar.

Commenting on the revelation, Senior Supreme Court Advocate, H.S.Phoolka said that the case needs to be reopened. He said Punjab & Haryana High Court can order the reopening and re-probe of the case but he said as Haryana Police seems to be a party in the crime and has failed to do justice with the victims and the case itself, he will seek that the case be handed over to CBI for proper investigation.