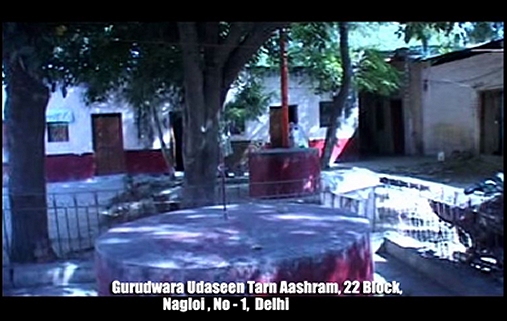 All India Sikh Students Federation (AISSF), "National 1984 Victims Justice & Welfare Society" and "Sikhs for Justice" (SFJ) have also discovered burnt ruins and debris of several other Gurudwaras in Nangloi, Sultanpuri, Kalyanpuri and Mangolpuri areas of Delhi. A list of names of newly discovered ruins of Gurudwaras and list of victims from Gurudwara Udaseen has also been released.

In November 1984 Gurudwara Udaseen was run by Sikhs who migrated from Peshawar Pakistan. Today, there is a cemented square in front of the Gurudwara where sixty five (65) Sikhs along with Granthi of the Gurudwara and Sri Guru Granth Sahib, were burnt alive.

According to Karnail Singh Peermohammad, President AISSF, the victims at Gurudwara Udaseen were targetted only because they were Sikhs. The newly discovered ruins of Gurudwaras across Delhi confirm that twenty six years after November 1984, Sikhs have still not received any justice. DSGMC has miserably failed to protect the Gurudwaras and has failed to prosecute the attackers during past 26 years. DSGMC have been repeatedly urged to file criminal complaint against Kamal Nath for leading the attack on Gurudwara Rakab Ganj Sahib but influential Sarna brothers who head DSGMC have been constantly shielding Kamal Nath and Congress (I).

According to Advocate Navkiran Singh, Chief legal Counsel to SFJ, the startling discovery of mass grave of 65 Sikhs along with ruins of burnt Gurudwaras in Delhi and ruins of Hondh-Chillar, Pataudi and Gurgaon is an irrefutable evidence that in November 1984, Sikhs were targeted and attacked in a systematic and identical manner throughout India.

Babu Singh Dukhia, President "National 1984 Victims Justice & Welfare Society" whose relentless efforts have brought forth the discovery of mass grave at Udaseen, urged witnesses and survivors to come forward if they know of any hidden location where Sikhs were killed during November 1984.

According to Legal Advisor to SFJ, Gurpatwant Singh Pannun stated that the new evidence and eyewitness accounts in Hondh-Chillar, Pataudi and other places proves that the November 1984 attacks were carried out with specific intent to destroy Sikh population of India. Despite of hundreds of Gurudwaras having been burnt in Delhi alone, no one has been investigated, charged or prosecuted for attacking the place of worship. The scope and findings of inquiry commissions and committees set up by the Indian Government are grossly lacking and insufficient.

Gurdwara Shri Guru Singh Sabha, S-Block, Mangolpuri, Delhi Only boundary wall. Inside railed. Moorti of Ganesh has been put there.

Gurdwara Shri Guru Singh Sabha, U-Block, Mangolpuri, Delhi Only boundary wall. Inside railed. Broken Thara of Nishan Sahib is still there. Moorti of Krishan and photos under the pipple tree.

Gurdwara Shri Guru Singh Sabha, F-Block, Mangolpuri, Delhi Only boundary wall. Inside mostly railed with some debris. Swasitka signs have been drawn on the main entrance on both sides.

Gurdwara Shri Guru Singh Sabha, 11/399 Kalyanpur, Delhi New Gurudwara built on one side and remains of old building with burnt chogaths are still there.