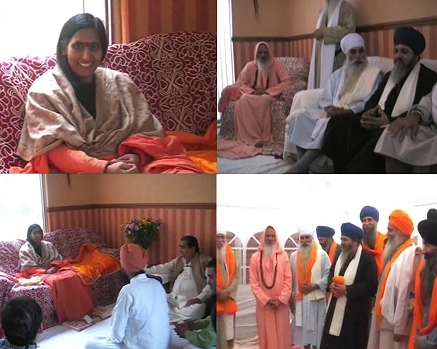 
London, UK - In a newly released video, the notorious Hindu Sadhvi Rithambhrai, who leads VHP's Army of Durga, and vows that those minorities that challenge the unity of Hindustan will be crushed and killed like dogs is seen in sangat of several Sikh parchariks before a Havan is performed at that residence.

Last week, when Panthic.org published an article and video on a well known UK Sikh TV presenter, Daljit Nirmala, performing havan and aartee with a notorious RSS Sadhvi, some outfits have complained that only one side of the story has been presented.

In the meantime Daljit Nirmala has given statements to the media that other Sikh parchariks were just as guilty as him since they too were also present at his home at that time.

In a strange twist, a new video was sent to Panthic.org by an anonymous e-mail account from UK. This new video contains footage of the Hindu Sadhvi Ritambhara at the residence of Daljit Nirmala (UK), supposedly on the same day of the initial video, but more surprisingly, the well known spokesman of the Sant-Smaj, Baba Hari Singh Radhavewala, Giani Avtar Singh Bandhani-Kalan, the grandson of Baba Gurbachan Singh Bhinderanwale, and several other Sikhs are present. Also present is Ritambhara's guru Swami Parmadand, whom she addresses as : 'ਆਪਣੇ ਪੂਜਯ ਗੁਰਦੇਵ ਯੁਗਪੁਰਸ਼ ਸਵਾਮੀ ਪਰਮਾਨੰਦ ਮਹਾਰਾਜ' during a RSS hate rally. 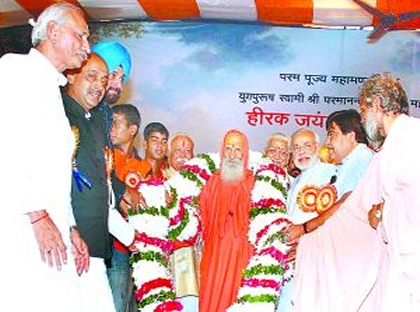 Sadhvi : Modern Day Durga of the VHP and RSS

It needs to be noted that Sadhvi Rithambhra is a firebrand Hindu activist, a member of the Vishwa Hindu Parishad (VHP) and Rashtriya Swayamsevak Sangh (RSS), and the founding chairperson of Durga Vahini (Army of Durga), the women's wing of VHP, who has vowed to crush anyone who challenges the unity of Hindustan.

O’ sons of Durga have declared – that state with pride “I am Hindu, and Hindustan is mine!”

Those who cannot love this Nation (Hindustan), have absolutely no right to live in it.

This video also contains further footage of the Hindu Aartee and Havan ritual that was released in the previous Daljit Nirmala video. It is assumed that this video was recorded on the same day when the Havan and Aartee occurred - although it is not known whether Baba Randhavewala or Giani Avtar Singh were present when those rituals took place.
Questions to ponder over:

What does the present Sikh leadership say about the challenge given by Sadhvi Rithambhra to those minorities who challenge the unity of Hindustan? Are they proud that our parchariks and associating with such dangerous Hindu nationalists and hate mongers?

Do the parchariks in the video have any moral obligation to the Sikh Nation, and those Shaheeds who sacrificed their lives for the establishment of Sikh sovereignty - or are they only selfishly obligated to their various 'sempardias' as stated by the Sadhvi : "ਧਰਮ, ਸੰਪਰਦਾਇ ਤਬ ਬਚੇਗਾ ਜਬ ਮੇਰਾ ਰਾਸ਼ਟਰ ਬਚੇਗਾ"

When will the Sikh Nation finally realize the failure and follies of our so-called leaders and parchariks?

When Panthic.org released the initial video, we were unaware that there was a feud brewing between Dalijt Nirmala and Balbir Singh, a Taksali Kathakar. Daljit Nirmala has made some very serious allegations against Balbir Singh, but has not provided any substantiating information or documentation of the allegations aside from a handwritten letter that accuses Balbir Singh of sexual assault on his spouse.

Sarbat da Bhala : Ignore the Panth and join the Enemy?

What can the Sikh nation expect from our parchariks when they are associating with right-wing Hindu militants that openly vow to crush those who challenge the unity of Hindustan, and openly state that Hindustand belongs to the Hindus – and any who does not does not swear allegiance to ‘Bharat’ has no right to live there and those confront them will die like a dogs.

Surely there will be outfits that are going to defend these Sikh parchariks by claiming that this is just 'sensationalism' by Panthic.org and that these Babas were meeting the Sandhvi out of “sarbat da bhala”.

It must be asked what kind of sarbat da bhalla will be accomplished by associating with those who are openly stating that minorities (which includes Sikhs) who challenge the unity of Hindustan will be crushed and killed like dogs, and the the land of Bharat belongs to the Hindus?

Out of the spirit of “sarbat da bhala”, how many of these parchariks have ever taken time to meet and support the families and widows of the 1984 pogrom victims or those families suffering under the ongoing brutality unleashed by the current Badal-Akali regime?

The sangat can judge for themselves the sincerity and hypocracy of our so-called parchariks and leaders.

*Editors' Note: Allegations have been made by some individuals that Panthic.org manipulated the above video to make it "appear" that the Parchaiks and the Sadhvi were together in the same room/house.

Aside from removing the text of allegations against Balbir Singh, we have posted the video as is - without manipulation.

From the information we have, this was a two day event at Daljit Nirmala's residence. The video clips show some of the people present at the event at various times, which is obvious from the re-arrangement of furniture and fixtures. The sender of the video has confirmed that the Parchariks and the Sandhvi were present in the house at the same time. This has also been stated by Daljit Nirmala in a recent radio interview.

To assume that the Parchariks and the Sadhvi were unaware of each other in a small home and did not interact is a ridiculous assertion. The video clearly shows the interaction between her Guru, Swami Parmanand and the Parchariks. As indicated, it is not clear whether the Parchariks were present during the Havan and Aartee rituals.