Sikh Channel (UK) Turns Its Back on Sikh Community 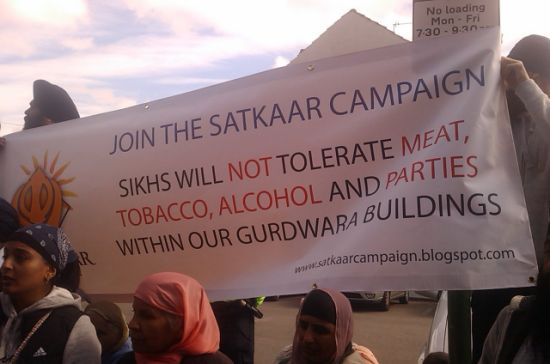 The Peaceful Protest was misrepresented by Sikh Channel UK

Birmingham, UK – On Saturday 28th May 2011, the programme 'Sikh Reports' was aired from 9.30pm to 10pm on the UK’s Sikh Channel (Sky 840) that discussed the Dudley Sikh rally against Guru Nanak Singh Sabha Gurdwara which had arranged a meat and alcohol party in its Sikh Cultural Centre knowing well that UK Sikh community would not tolerate such sacrilege. Although the guests on the show explained the rally and what happened accurately in its correct context, the Channel itself showed a short video clip lasting less than a few minutes from the six hour peaceful rally that portrayed the rally in a negative light. From the actions of Sikh Channel it seems as if their interests are against the sentiments of the Sikh community who are attempting to uphold the sanctity of Sikh institutions.

The half an hour programme aired on Sikh Channel presented by Jagjit Singh, had three guests that were present at the peaceful rally. The guest speakers explained how the rally had been initially called off on the afternoon of Thursday 26th May, after the family that had booked the meat and alcohol party realised that it was against Sikh ethics. The peaceful rally was called again after the community found out that the Gurdwara Committee had arranged another party to defy the Sikh religion and invoke outrage in the UK’s Sikh community. 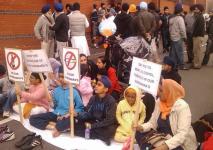 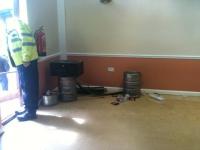 Barrels of Alcohol Stored in
the Gurdwara Compound

(Click to Zoom)
The six hour rally was attended by 500 Sikhs which was a mix of young children, men, women and the elderly from across the country. However, the Sikh Channel video footage aired on Saturday night showed small group young Sikhs having a confrontation with the Police. It is beyond belief how irresponsible the Sikh Channel has been in ignoring the Simran, Shabad singing and recital of Chaupai Sahib that happened throughout the protest and instead portray a negative light of the protest in the eyes of viewers through a small clip showing a small element of disorder.

From the clip shown on Sikh Channel, which was shown without the awareness of the guest speakers, the impression given was that the whole rally was aggressive, unruly, and violent, which is far from the truth. We received an email sent to Sikh Channel from Bibi Surinder Kaur Dhesi, former Mayor of Banbury and Councillor, who attended the peaceful rally stating:

"I was deeply shocked and saddened that out of the 6 hour protest, Sikh Channel showed a short clip of a confrontation between Police and a tiny group from the hundreds of peaceful protestors. I attended the entire protest from beginning to end and did not experience any violence of any sort. Rather it was the party people who were swearing, goading and insulting the Sangat. The Sangat did Paath and Simran throughout the protest. None of this was shown on Sikh Channel.

If you were going to stoop so low, you could at least shown footage of the party people goading and insulting the Sangat, Police pulling the beard of a Singh, the Police taunting protestors and the Police bringing their dogs very close to the Sangat who were sitting down and reciting Chaupaai Sahib and doing Simran" 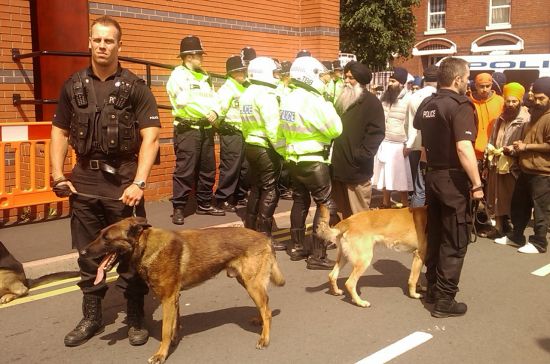 Bhai Mandeep Singh from London, who attended the protest stated:

“I encouraged my mother to watch the show with me when I learnt of it's broadcast on the way back from Dudley, so that she can understand and see why I had to spend the whole day out. I was just as shocked as she was to see that 'violent' clip.

If Sikh Channel had planned to show the short video clip of disorder then they should have had enough moral integrity to explain the context that led to the small element of disorder.

The Sikh Channel failed to show the provocation of the Sikh Sangat from the Gurdwara party side which led to a small number of youngsters to charge at the party hall, these include:

1. A Mercedes pulled up at start of rally transferring booze into the Gurdwara hall in the full view of the Sikh Sangat who were sitting peacefully outside reciting Chaupai Sahib.
2. The party people purposely opened the door and starting blasting Bhangra to drown the sounds of Chaupai Sahib that the Sangat were reciting.

5. After the numerous taunts and disrespect of Gurbani and the Sangat, some youngsters charged at the party people, the party people hid behind the gates of the Gurdwara community hall and began to swear at the Sangat.

6. One of the party goers brought a plate of meat out and starting eating in front of the Sikh Sangat that had come to rally against the sacrilege to invoke further rage.

7. One person from the party purposely came out and said “Come on Singhs take a good photo of me” to provoke the Sangat even more.

8. Two so called "Amritdhari" ladies that wearing Patke were used by the Gurdwara Committee to make meat inside centre for party people.

9. Men drinking alcohol inside the hall, continued to drink alcohol when some of the Sangat entered the hall and began swearing and using obscene language against the Gursikhs.

Secondly, the provocation and mishandling of the situation of the West Midlands Police caused disorder, and added to emotions. In particular:

1. The Police failed to separate the two groups. The Sangat were cordoned off whilst the party people were free to walk around and taunt the Sangat.

2. Sikh men had their turbans knocked off by the Police.

3. The Police were using excessive force of pushing and striking people with their baton’s to move the Sangat back.

5. At least two Police officers who were handling the dogs in front of the Sangat sitting in the road reciting Simran were wearing no number badge to identify them which is illegal.

6. Sikh men were given a dead leg after receiving blows with the Police batons by the stairs leading to the rear entrance of the hall.

7. One Police Officer told an Amritdhari Sikh “What you wearing?” whilst pointing at his Kirpan which was could be slightly seen through his clothes. He said he is wearing a Kirpan (a small Kakkaar Kirpan worn in a Gatra). The Police Officer said, “I am going to take that off you.” Showing the lack of religious training the Police Officers had.

8. The Police were disorganised and were not able to promptly arrange dialogue between the offending party people and the Sikh community.

9. Some of the Police Officers didn’t know what the protest was about and were confused what is happening, which is very dangerous. As a result of this some of the Police were handling the situation insensitively and heavy handily which people found intolerable.

If the Sikh Channel relies on the financial support of the Sikh community then they have a moral and ethical duty to portray a true picture of events and in its appropriate context. To add further fuel to the fire the Sikh Channel’s Official Facebook status showed support for the party goers and condemned the rallying Sikhs.

The Sikh Channel which does countless appeals for donations and direct debits has countless times disrespected the Sangat and played the Sikh community. It has aired controversial programmes that have gone against Sri Akal Takht Sahib’s Hukamnamas (edicts), they have had shows where the presenters have raked up controversial Panthic issues to hurt the sentiments of Sikhs within the community, they have shown Katha that insulting Gursikhs, Panj Pyaare and Sri Akaal Takht Sahib over Mool Mantar, they had a RSS affiliated person presenting a weekly programme, and now they have back stabbed the Sikh community with their video footage and Facebook official comments.

We have received emails from several members of the public who were disgusted at Sikh Channel's behavior, one of them warned:

“I will be urging all my friends and family to withdraw their financial support from Sikh Channel unless an official apology is made on behalf of Sikh Channel aired on the channel and in writing within the next 3 days.”

It is sad that the mainstream media are calling the Sikh community that attended the peaceful rally “Sikh militants” and yet when there were student violent protests in London this year the mainstream media labelled them as a “small minority of troublemakers” and “a small hand of people that caused disorder”. It is interesting that although the students protesting in Central London smashed windows, attacked the Police, graffitied walls and attempted to break into Government buildings they were not brandished “hardliners” or “militants.”