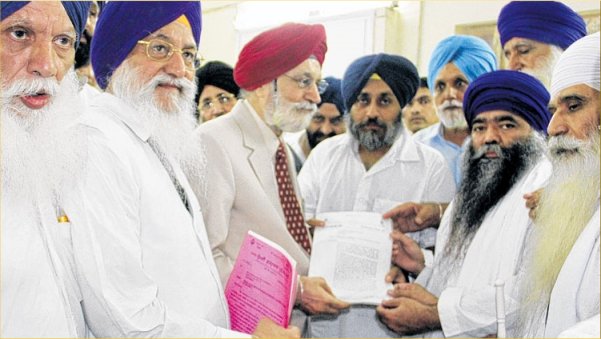 THE MASAND COMBINE: Representatives of the Sant-Samaj (Dhumma, Randhawa, Sukhchain Brahmpura) and the ruling Badal Regime presenting a letter to the Election Commision

CHANDIGARH, PUNJAB (KP) - The mainstream Indian media has published proof of rampant voter registration fraud being carried out by the ruling Akali Dal Badal party and Sant-Smaj combine in which non-Sikhs are being registered to vote in the upcoming Shiromani Gurdwara Parbandhak Committee (SGPC) elections.

The Hindustan Times and the Indian Express, both have published reports indicating Akali Dal Badal party has fraudulently registered Hindu and Muslim individuals to partake in SGPC polls.

"Hindus, Muslims and other ineligible voters have been included as voters for SGPC election from CM Badal’s village... how one can expect free and fair elections... ?”

Various Sikh political parties have filed complaints to the office of Gurdwara Election Commission regarding these violations of the Gurudwara Act, yet they have all fallen on deaf ears and have elicited no official response from the commission or the centre.

A complaint letter by Dal Khalsa representatives directly questioned the Gurdwara Election Commission’s independence and credibility and charged “All your tall talk…regarding free and fair elections has been thoroughly exposed…your neutrality has been questioned, the sanctity of the gurdwara elections has been compromised.”

Headlines from the Hindustan Times Newspaper

The letter further stated: “Media report have exposed that even Hindus, Muslims and other ineligible voters have been included as voters for SGPC election from Chief Minister’s village, Badal. In such a condition, how one can expect free and fair SGPC elections to be held on September 18?”

A report by the Hindustan Times stated that Ghasii Lal and Balram, two clean-shaven Hindus from Rajansthan and both ineligible to vote in the SGPC elections were verified to be on the official voter list.

"More than 50% of the men from Sikh families of Badal village have shorn hair. But they all are in the voter list of the SGPC."

According to the Times, Ghaisi Lal and Balram are not alone. Scores of people whose names are in the SGPC voters' list in Badal village in Punjab's Muktsar district are not eligible to vote in the elections, their investigations and documents indicated.

The HT article further stated that:

In some cases, ‘Singh’ and ‘Kaur’ have been added to the names. There are also at least 17 Hindu-sounding names in the SGPC voter list without 'Singh' or 'Kaur'. Badal village has around 1,720 registered voters for the SGPC polls.

"There are many migrant voters whose names have been added to the voter list for their loyalty towards the Badal family," said Nachhatar Singh, a resident of Badal. "Apart from migrant labourers working in fields, many Hindu families of the village are also included in the voter list."

"Fake voters are not only from the Hindu and Muslim communities," said Jaswinder Kaur, former sarpach of Badal. "More than 50% of the men from Sikh families of Badal village have shorn hair. But they all are in the voter list of the SGPC."

Muktsar deputy commissioner Arashdeep Singh Thind said a probe and verification from concerned returning officers would be ordered if any complaint came to his office. He however avoided further questions saying he was busy in flood-control work.

Polling fixing fraud, ballot stuffing, intimidation, and voter bribery via free distribution of cheap alcohol and illegal drugs are a common occurrence in the SGPC elections and an accepted part of the process by those who are involved.

This election will be no exception despite the direct involvement of the Sant-Samaj, a self-appointed trade union of “Saints” whom many dub as charlatans due to their political alliance with the corrupt Badal regime.