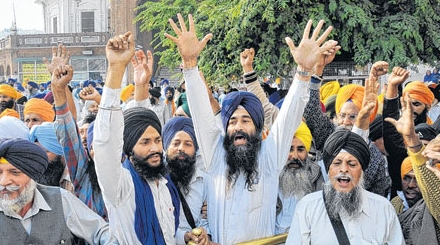 Major Embarrassment to Badal, Makkar, and the SGPC

Sri Amritsar Sahib (KP) - When the right-wing Hindu militant BJP leader LK Advani visited Sri Darbar Sahib as part of a publicity stunt this week, the Hazoori Ardaasia Giani Kulwinder Singh declined to offer Advani the customary ‘siropa’ given to guests who donate Rs100 or more at the sancta sanctorum.

Kulwinder Singh. It was reported that some of the politicians present inside Sri Darbar Sahib tried to persuade Giani Ji into presenting a siropa to the Hindu leader, but Giani Ji did not budge and later stated that his conscious and convictions did not allow him to honor a person like Advani.

Outside, Akali Dal Amritsar and other Sikh organizations vociferously protested the visit by the BJP terrorist, but they were cordoned off by Shiromani Gurdwara Parbandhak Committee (SGPC) ‘task-force’ security team. Slogans such as 'Khalistan Zindabad', 'Advani Murdabad' (Death to Advani), 'Advani Go Back’ could be herd around the complex.

"My
conscious and convictions did not allow me to honor a person such as Advani"
- Giani Kulwinder Singh, Sri Dabar Sahib

It needs to be noted that LK Advani had openly supported and praised the June 1984 attack of the Sri Darbar Sahib complex in which thousands of innocent Sikh were killed and the building of Sri Akal Takht Sahib was left virtually destroyed.

As Advani was leaving the complex, opposition SGPC committee member Gupreet Singh Jhabbar representing Akali Dal Amritsar directly questioned Advani about why he supported the 1984 invasion on Sri Darbar Sahib resulted in the death of over 20 thousands Sikhs. Immediately, BJP stooge Navjot Sidhu interjected and threatened the SGPC member and barked: “You just step outside then I will deal with you!” 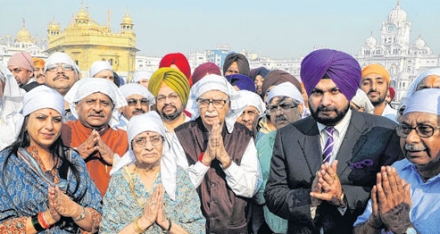 Advani at Sri Darbar Sahib with other right-wing Hindu Fascists

Meanwhile Akali Dal Amritsar and other Sikh representatives sent their appreciations to Giani Kulwinder Singh for refusing the siropa to Advani.

As was expected, the Badal controlled SGPC later presented a ‘siropa’ to Advani in a closed room session in the SGPC information office, but declined to offer details on who actually presented the ‘siropa’ to the despised Hindu leader.

In recent times, presenting 'siropas' to politicians and so-called VIPs has always been a controversial practice and Sri Dabar Sahib sewadars have been criticized and chided over this many times. When Parkash Badal's deceased wife, Surinder, once visited Sri Darbar, Giani Jaswinder Singh hastily left his Hazoori duty with Sri Guru Granth Sahib Ji and personally walked over and presented a siropa to Badal's patit spouse.

After this incident, respected Head Granthi Giani Mohan Singh Ji (who declined the offer to become Sri Akal Takht Sahib Jathedar in 1999 after Bhai Ranjit Singh was removed) caught up with Giani Jawinder Singh in the parkarma and reprimanded him for bringing denigration to the holy seat of Baba Budha Ji, the first Granthi Sahib of Sri Darbar Sahib.

Ironically, as word spread of this incident, as retribution by the Badal Clan, Giani Mohan Singh was forced into early retirement and dismissed of any future duties at Sri Darbar Sahib. Such is the treatment given to these sewadars whom the SGPC and Akali Dal considers as mere employees who could be dismissed from their religious seva at the whim of politicians.