Sri Anandpur Sahib (KP) - During the grand opening ceremony of "Virasat-e-Khalsa" complex that orchestrated by the Punjab government at Sri Anandpur Sahib, the Takht Jathedar announced that on December 5th, 2011 they would be honoring Parkash Badal for his "monumental seva to the Khalsa Panth" by giving him the title of "Panth Rattan Fakhar-e-Quam" (Jewel of the Panth, Pride of the Nation.) 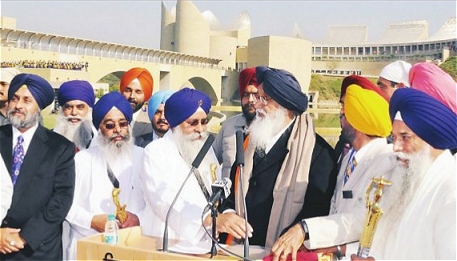 The opening ceremony had already been marred by controversy when Sikh organizations discovered that various anti-Sikh personalities had been invited for entertainment as VIPs to the event.

Despite the call for boycott and a warning by Panthic organizations that this function was just another publicity stunt by the ruling Badal family for the upcoming elections, members of various Nihang Dals, and sant oriented deras were present during the ceremony in which religious traditions were disregarded and flouted.

The function stage was controlled by former Member of Parliament Tarlochan Singh who is infamous for his surreptitious connections with Rashtriya Swayamsevak Sangh (RSS) and various Indian intelligence agencies. He has openly condemned the Sikh Freedom Movement of the 1980s and 1990s, and has even criticized the idea of establishing a memorial for the victims of June 1984 Army Assault of Sri Darbar Sahib Complex. Sri Akal Takht Jathedar Giani Gurbachan Singh, meanwhile, had virtually a nil role in the entire proceedings – despite being labeled as the highest ranking Sikh leader of the Panth.

Instead, the entire attention and praise was directed towards Parksh Badal throughout the ceremony. Tarlochan Singh gave the entire credit for building the complex to Paraksh Badal, and stated that this complex was his “gift” to the Panth and entire humanity. Shamelessly both Badal and Tarlochan Singh asked the attendees to support the Badals in the future so they could continue providing such services to the Panth – a direct hint and a plea for votes for upcoming state elections.

Badal Family and various BJP politicians in VIP area on sofas in front row, representatives of Nihang Dals and Sant Deras can bee seen sitting on plastic chairs in the back rows

Even the sacred “Ardas” was not spared from politics. Performed by Takht Sri Kesgarh Sahib Jathedar Giani Tarlochan Singh while most of the attendees stood wearing shoes; Parkash Badal’s name was mentioned no less than one half dozen times. The Jathedar in the Ardas asked for the “charrdi-kala” of Parkash Badal who had “gifted Virasat-e-Khalsa” complex to humanity. Ridiculously, Sukhbir Badal later went on to state that this complex was now to be the “eighth wonder of the world.”

Despite the call for boycott of this function by various Sikh organizations, leaders of various Nihang Dals and sant-doms could be seen sitting in the audience behind the Akali BJP politicians and “VIPs.” Other members of Nihangs Dals were strategically placed throughout the complex on horse-back and on elephants for dramatic effect.

It was clear that this was no religious function, but political publicity rally for the Akali-BJP-Sant-Samaj combine in which Takht Jathedars and Nihangs were used mostly as side-show puppets for cheap publicity by disgraced leaders.

Shameless Promotion of Badal was evident throughout the Complex

It is sad to see our Takht Jathedars and organizations such as Budha Dal and Tarna Dal, which once lead the entire Sikh Nation and from whom kings like Raja Ranjit Singh trembled, now being relegated to being cronies of traitorous apostates like the Badals who have been undermining the sacred institutions of the Khalsa Panth and supported anti-Sikh causes for the last three decades.

By honoring Parkash Badal with a "Panth Rattan Fakhar-e-Quam", the Takht Jathedars will be repeating the role of the traitorous Jathedar Aroor Singh who under the directions of the British-controlled Punjab Government denigrated his noble position by endowing General Dyer, the villain of Jallianwala Bagh massacre, a similar honor at Sri Akal Takht Sahib.