Puppet Jathedars Give Panthic Enemy Highest Honor of the Panth

The bestowing of the dubious award by the puppet Jathedars, illustrates the complete leverage and political control by Akali Dal Badal over even the highest institution of the Sikh Panth - Sri Akal Takht Sahib and the Jathedars. Panthic observers have stated that this episode by the puppet Jathedars has overshadowed the act of Sarbrah Aroor Singh who under the directions of the British-controlled Punjab Government denigrated his noble position by endowing General Dyer, the villain of Jallianwala Bagh massacre, with a 'siropa' at Sri Akal Takht Sahib. 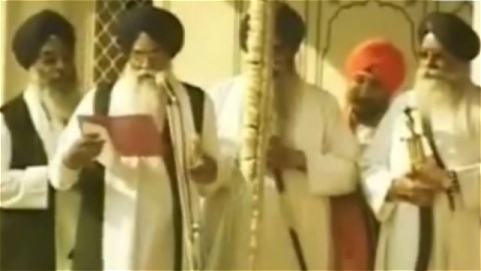 The title “Panth Rattan Fakhar-e-Quam” is first such title given to any individual. In the past the title "Pant Rattan" has been bestowed posthumously by the Panth to highly respected Sikhs such as Mahan Kavi Santokh Singh, venerable Baba Kharak Singh, Sirdar Kapur Singh, and others.

Interestingly, all past recipients of the “Panth Rattan” award were all practicing Amritdhari Sikhs who were widely respected in the Panth for their contributions to the Sikh Nation. On the other hand, Badal, an apostate (patit), and is loathed by Panthic organizations for his anti-Sikh activities for the last four decades, has been conferred the grander designation “Panth Rattan Fakhar-e-Quam.”

There is already a call for social boycott and rejection of these puppet Jathedars, their Akali masters, and the corrupt dera based charlatan babas who have fleeced the Sikh nation for too long. Some Sikh organizations worldwide are already demanding the resignation of those Jathedars Granthis who partook in this shameful act and denigrated the Sacred Immortal Takht of Sri Hargobind Sahib Ji.

The repercussions and fall-out should not be under-estimated, there is a strong opposition brewing against cronyism and the political corruption that has infected the highest of the Sikh institutions.