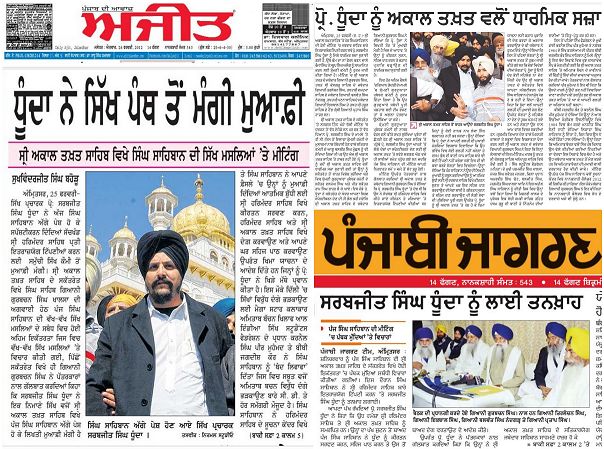 Sri Amritsar Sahib (KP) – Just hours after asking for forgiveness at Sri Akal Takht Sahib, the humiliated missionary preacher denied that he ever apologized for anything or was ever chastised for his misdeeds, but Sri Akal Takht Jathedar's statements seem to contradict Dhunda's latest claims.

Shortly after the controversial missionary preacher, Sarbjit Dhunda appeared at Sri Akal Takht Sahib for making derogatory statements against the Gurbani Kirtan recited at Sri Darbar Sahib, various headlines flashed across various Punjabi newspapers. All of them detailing Dhunda's humbling appearance at the Highest Sikh Religious Seat of Authority with captions such as :

Dhunda signing his written apology and listening to Kirtan at Sri Dabar Sahib as part of his penance.

Yet, just hours after his appearance at the apex Sikh Takht, the arrogant preached went on the Canadian Punjabi Radio station and declared that he received no punishment from Sri Akal Takht Sahib, nor did he tender any apology when he was summoned. Here are some audio extracts of his statements.

Khalsa Press, contacted Akal Takht Jathedar, Giani Gurbachan Singh, and requested a clarification regarding Sarbjit Dhunda’s appearance at Akal Takht Sahib and was point blank asked whether Dhunda actually apologized for his controversial remarks and received any “Tankah” (religious penance) for his offense.

Excerpts from Exclusive Interview with Giani Gurbachan Singh by Panthic.org

PANTHIC.ORG : Giani Ji, can you elaborate on Sarbjit Dhunda’s appearance at Sri Akal Takht Sahib on February, 25th, and the apology he tendered before you?

PANTHIC.ORG : Giani Ji, can you provide details on how Dhunda was reprimanded or punished for his controversial remarks?

(Giani Gurbachan Singh states that Dhunda was the following penance by Sri Akal Takht Sahib: (1) Dhunda must listen to Gurbani Kirtan for one hour, offer Karah Parshad-Degh at Sri Darbar Sahib, and he must recite an entire Sehaj Patth at his private residence as an atonement.

Furthermore, it is clear in the written statement that was submitted by Dhunda that Dhunda clearly apologized when he was summoned at the Takht, here is an extract of that apology: 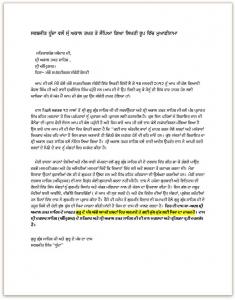 This is not the first time Dhunda has done an about-turn on about his religious beliefs. On stage he has rountinely ridiculed various Gurmat traditions and practices such as Simran and Naam-Abhyiaas, yet when he was confronted in Calgary and Toronto by pro-Panthic individuals, he claimed that he believed in the concept of Naam-Simran, Amritvela, and Gurmantar and had no issues with Dasam Bani. In both cities, Dhunda even went to the point of criticizing heretics such as Gurcharan Jeonwala, and Inder Ghagga and claimed he had no connections with them anymore.

Only time will tell if Dhunda's apology to the Sikh Nation was genuine or just an insincere act to save face. From his recent statements, it sounds like the latter.