Killing and Persecution of Sikhs Continues in Punjab 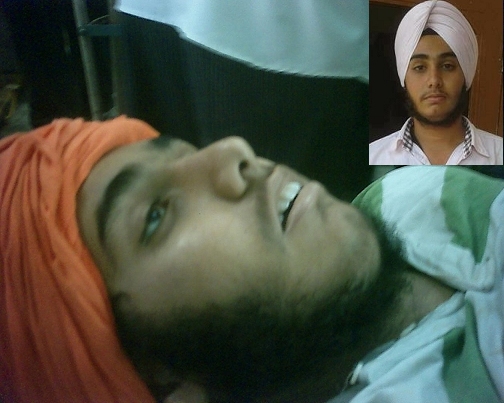 GURDASPUR, PUNJAB (KP) – Shock, grief and anger quickly spread through the Sikh community as news spread that an innocent Sikh youth reciting naam-simran at a protest in Gurdaspur was killed on the spot by members of Punjab Police who attacked a Sikh gathering without any warning.

Bhai Jaspal Singh of Sidhwan, an 18 year-old Amritdhari engineering college student, along with other members of the Sikh community had gathered together outside a local Gurdwara to protest the Wednesday assault on another youth by members of the right-wing Hindu Shiv Sena.

Eyewitnesses stated as the Sikhs were chanting "Waheguru" loudly, suddenly the police charged at them and began to lobby teargas and lathis (batons) on the protesters, and then opened fire on them outside the Gurdwara Sahib. Bhai Jaspal Singh was shot during this unprovoked rampage by the Police. Another youth, Ranjit Singh Pandher was seriously injured due to a gunshot.

Video of Police Shooting and Rampage

Ironically, the same police turned a blind eye towards the Shiv Sena perpetrators, and even collaborated with them during their attack on the Sikhs.

The murder of the Sikh youth was reminiscent of the December 2009 Ludhiana Kand in which another Sikh, Bhai Darshan Singh Lohara, was killed by the local police during a protest against Ashutosh Nourmehlia cultists.

Incidentally, in both cases it was the Punjab police who had fired on the Sikh protesters without any warning or provocation. Both incidents have occurred under the reign Badal’s Akali, which has yet to take action against Bhai Darshan Singh’s 2009 murder.

Meanwhile, scores of Sikh activists have been arrested throughout Punjab under the “preventive measures” of under section of 107/51 IPC.

Opposition leader Amarinder Singh criticized the Police action in Gurdaspur, and stated that the government was proving ineffective in maintaining peace and law and order in the state.

Gurdaspur Member of Parliament, Partap Singh Bajwa also condemned police action against protesters and stated “I am aghast with the audacious, irresponsible and inhumane act by the police authorities in firing on unarmed citizens in Gurdaspur. The police and district administration has been found lacking in its preparations once again. The government must act against the errant officers” .

The Dal Khalsa spokesman charged that “After lobbying teargas on Sikh protesters, the police opened fire on them. Many people in Gurdaspur had said that the police behavior was completely ruthless.” Dal Khalsa and other Sikh organizations have demanded a judicial probe into the incident and suspension of the officer heading the police party.