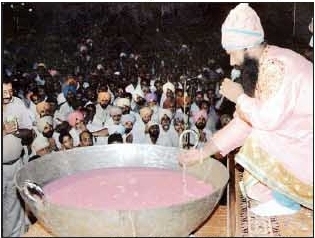 BATHINDA, PUNJAB - The much publicised criminal case of 2007 registered against the Dera Sacha Sauda chief Gurmeet Ram Rahim, in which the Bathinda Police had recently filed a cancellation report, took yet another turn on Saturday, when a group ‘Lawyers for Human Rights’, representing the Sikh community, joined the legal proceedings and accused the police of trying to shield the accused under political pressure.

Appearing in the court of the Additional Chief Judicial Magistrate (CJM) Harjeet Singh, the lawyers countered the pleas of the police one by one and urged the court to pull up the state cops to file the challan in the case at the earliest.

Countering the main plea of the police that during investigation it could not be proved that the Dera chief had visited the Salabatpura, where he was accused of appearing in attire akin to one worn by the tenth Sikh guru, Guru Gobind Singh, and imitated the creation of Khalsa Panth by offering ‘Amrit’ like ‘Jaam-e-Insaan’ to his followers, the Human Rights lawyer Navkiran Singh, who was contesting on behalf of one of the complainants Jaspal Singh Manjpur, informed the court that the Dera chief himself, giving in writing to Punjab and Haryana High Court, had once admitted the fact that he had offered ‘Jaam-e-Insaan’ to Dera followers at Salabatpura.

Further, defusing the claim of a senior lawyer Nan Lal Garg, who had appeared in the case to assist the court from Dera-Police side, that the court was not at all authorized to interfere in the case without the sanction of the state, lawyer Navkiran Singh and a local advocate Jatinder Roy Khattar, who had appeared on behalf of Rajinder Singh Sidhu, an Akali leader, on whose complaint the police had registered the FIR against the Dera chief in 2007, apprised the court of the fact that the state had once given its sanction to proceed the case.

While arguing against the cancellation report filed by the police, the lawyers pleaded the court to take up the matter and award the punishment to the Dera chief as he had allegedly hurt the sentiments of the entire Sikh community. Meanwhile, they termed the gesture of Punjab Police submitting the cancellation report of the case for which once they were urging the High Court to launch legal action against Dera chief, a purely political move.

“The whole sequence suggests that the political parties would have used the case as a tool to get Dera votes and it is for what that just three days before the Vidhan Sabha Polls in Punjab, the state police tendered a cancellation report with a “fabricated” affidavit of the complainant to weaken the case. “In the light of the sensitivity of the case and the way things had unfolded, we hope rather than accepting the cancellation report, the court would ask the Police to file the challan against the Dera chief at the earliest,” said Navikran Singh, while arguing in the court.

Going by the arguments, the ACJM adjourned the case for next hearing on February 18 to decide the fate of cancellation report filed by the police.

Speaking to media, advocate Navkiran Singh said, “As the alleged gesture of Dera chief had hurt the sentiments of Sikh community, even if the complainant Rajinder Singh succumbing to the police or political pressure withdraws the complaint, the FIR cannot be cancelled as in this case whole Sikh community is involved and Sidhu too had lodged the complaint just for being the member of the pained community.”