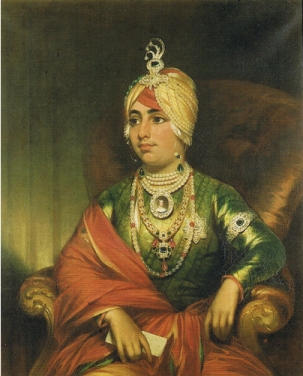 Sikh Raj lost - courtesy internecine fratricide, treachery by Dogra courtiers. After annexation of the Sikh Raj, Governor General Lord Dalhousie took Maharaja Duleep Singh who was just nine years old under his tutelage. Thereafter, it was ensured that all the Sikh attendants and Granthis were removed from his service. Young Duleep Singh with one Muslim Mian Khema was brought from Lahore to Calcutta. After some time Mian Khema was also replaced by Pundit Bhajan Lal of Farukhabad. Bhajan Lal was a product of American Mission School and he used to recite Bible to young Duleep Singh.

As planned, on 8th March, 1853 in a special function held at Calcutta under the stewardship of Bishop Dr. Wilson and W. Jay Jay this last flame of independence of Sikh Raj was converted to Christianity. It is interesting to note that even despite the conversion of Duleep Singh to Christianity his hair were not shorn for full one year and he continued to adore beautiful turban.

Then after one year to delink young Duleep Singh from Baba Nanak his hair were also removed. How candid is E. Dalhousie Login when she writes in Lady Login's recollections,

"He (Duleep Singh) had been long anxious to show that he was no longer a follower of Nanuk, the Sikh Prophet, by cutting off the long tress of hair which he, in common with all Sikhs, wore twisted up into a knob above the forehead and covered with the bright-coloured under-turban. "

The most important point to note in this episode is that even the firanghees accepted that by cutting his hair a Sikh breaks his relationship from Guru Nanak Dev ji.

During this period Maharani Jind Kaur, mother of Duleep Singh was imprisoned at Chinar fort. She managed to escape from there and wading through jungles and facing physical, mental agony and conspiracies this Punjabi Queen managed to reach Nepal. In the process she had lost her eye sight. With the help of King of Nepal she was able to meet Duleep Singh, no longer a Sikh. Although she could not see her son she just put her hand on the head of Duleep. Instead of the royal turban when her hands touched the naked and barren head she screamed and wailed. The loss of her husband Sher-i-Panjab Ranjeet Singh, the kingdom, the conspiracies or the arduous pauper like situations, insinuations could not shake her courage and boldness. But now having touched the shorn head of her son she totally broke down. Young Duleep was totally shaken. He told his mother that he could not restore back her husband, kingdom or riches but he would definitely like Bhai Mahan Singh would get the declaration of desertion to Guru's dictate removed.

"In this background on 9th March, 1886 Duleep Singh wrote from England to one of his close relative in Punjab, I need not tell you how pleased I shall be (if the Government permits) for you to be present at my receiving "Powhl" which I trust my cousin Thakar Singh Sindanwalia will administer to me…..I put my faith entirely in Sutgooroo who now that I turn to him for forgiveness I know will not forsake me."

Despite having decided to remove his apostasy Duleep Singh in a rare gesture addressed a letter to the Sat Sri Akal Purak ka Khalsaji seeking forgiveness. The repentance letter is as follows:

It was not my intention ever to return to reside in India, but Sutgooroo, who governs all destinies, and is more powerful than I, his erring creature, has caused circumstances to be so brought about that, against my will, I am compelled to quit England, in order to occupy a humble sphere in India. I submit to His Will; being persuaded that whatever is for the best will happen.

I now, therefore, beg forgiveness of you, Khalsa Jee, or the Pure, for having forsaken the faith of my ancestors for a foreign religion; but I was very young when I embraced Christianity.
It is my fond desire on reaching Bombay to take the Pahul again, and I sincerely hope for your prayers to the Sutgooroo on that solemn occasion.

I am compelled to write this to you because I am not permitted to visit you in the Punjab, as I had much hoped to do.
Truly a noble reward for my unwavering loyalty to the Empress of India! But Sut Gooroo’s will be done.

I remain,
My beloved Countrymen,
Your own flesh and blood,

It is pertinent to note that young Duleep Singh was not blessed with the protection, love and care of his parents on his head and he was literally in the imprisonment of aliens but realized his glorious past and the heritage of the Gurus and came back to the right path. But those parents who themselves take their innocent children to the saloons for cutting their hair, are they not guilty of unpardonable act of ecclesiastical murder of their own kith and kin.
About this situation Bhai Gurdas ji writes at Vaar 35, Pauri 22, "If the mother poisons her son, who can save him. If the security does the pillage who can save?"