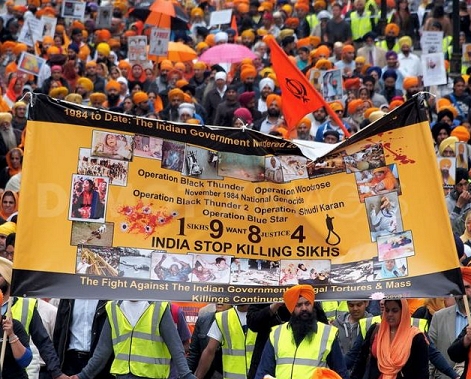 LONDON, UK - Many Sikh organisations in the UK have deliberately not issued any official statements as they wanted the Metropolitan Police to fully investigate the assault on Lt Gen (Retd.) Brar on Sunday 30 September 2012 in London without any interference and as the Sikh community is law abiding and recognises its wider public responsibilities.

With four arrests in the West Midlands last Thursday, a further 11 arrests in London on Friday and one additional arrest in London on Sunday we have waited until two men aged 33 and 34 were charged yesterday with ‘wounding with intent to do grievous bodily harm’ and the last person being held released earlier today before issuing this statement.

There has been constant irresponsible and sensational media reporting in India and premature statements from Indian politicians for the last ten days, since the minor assault on Brar. The assault left him with what appear to be superficial scratches covered by sticky plasters, following an altercation that probably lasted no more than a couple of minutes. Although Brar appears to have been slightly roughed up and left with a few scratches the 78-year old miraculously appears to have received no visible bruising or black eyes let alone any life threatening injuries, as he has claimed and has been reported in the Indian media, although four men were supposedly involved in the assault. In fact he was well enough to be discharged from hospital within a few hours and return to India less than 48 hours after the so-called life threatening knife attack. These facts have not been lost on the lawyers representing those who have been charged, as well as the Crown Prosecution Service.

On Monday 1 October Brar’s wife told NDTV ‘We cannot say if they were Sikh’ and yet Brar within 24 hours was claiming they were not only Sikhs, but those sympathetic towards an independent Sikh homeland. Former Indian army Lt Gen (Retd.) P.N. Hoon contradicted Brar the following day by saying the attackers would have achieved their target if it had been a well-planned attempt. ‘I don't think this is too planned an attack because if it was too planned an attack then I would have been very sad because they would have really achieved their target’.

Brar in several interviews has criticised the large annual Remembrance March and Freedom Rally organised by Sikhs in central London and tried to make a link between this peaceful protest and the minor assault on him in London. The Sikh Federation (UK) is one of the main organisers of this event, which attracts tens of thousands each year and has been growing in strength in recent years. It is this growing support for the Remembrance March and Freedom Rally more than 28 years after the June 1984 Indian army assault on the Golden Temple Complex that is causing most bother to the Indian authorities. The Metropolitan Police, Royal Parks Agency, Greater London Authority and Westminster Council have all praised the impeccable behaviour of Sikhs, but the Indian regime will try all sorts of tactics to try and marginalise Sikhs. Last year the Indian media reported the Indian Foreign Minister KM Krishna claimed the UK Foreign Secretary, William Hague had agreed to curb Sikhs from organising such protests, but this was publicly denied by the UK Foreign Office.

Many in the Sikh community are of the view that Indian government interference and pressure on the authorities in the UK has led to the unnecessary arrest and questioning of many innocent Sikhs in London last Friday who they believe are not associated in any way with the minor attack on Brar. The release of all of those from London, except those being held for immigration purposes, after questioning and without any charges being brought supports this view. The British Sikh community is of the opinion that there has been an overreaction by the Metropolitan Police in making these arrests in London and is concerned the police have acted disproportionately given the scale of arrests for a minor assault or the arrests have been politically motivated with the police being forced to act in this way to appease a foreign government.

The fact that lesser charges have been brought by the Crown Prosecution Service on the two men from the Midlands, who are not believed to be associated with any recognised Sikh group, call into question the various interviews given by Brar who suggested it was an assassination attempt by those leading the campaign for an independent Sikh homeland. The Indian media continues to falsely report the incident as a murderous attack and chastise the minority Sikh community.

What is clear is that Brar should never have been given entry to the UK. Recently the UK Foreign Office Minister responsible for human rights confirmed the UK policy is ‘that accreditation shall be refused to any individual who may present a safety or security risk, where their presence in the United Kingdom would not be conducive to the public good’. Sikhs across the globe remain deeply offended by the Indian army assault on the Golden Temple Complex in June 1984 led by Brar and the killing of hundreds if not thousands of innocent pilgrims including men, women and children, some with their hands tied behind their backs.

If Brar wanted to take the risk of visiting the UK to see his daughter the Indian authorities should have ensured he had the appropriate security, if they believed he represented a safety or security risk. However, the lesson for the British authorities is the presence of the likes of Brar, who the Sikh community view as a war criminal responsible for the killing of hundreds if not thousands of innocent Sikh pilgrims, is his presence in the UK is ‘not conducive to the public good’ and he and others like him should be refused entry to the UK as a preventative measure. The Sikh Federation (UK) will be taking up this matter with UK politicians, including Ministers, in the next few weeks.