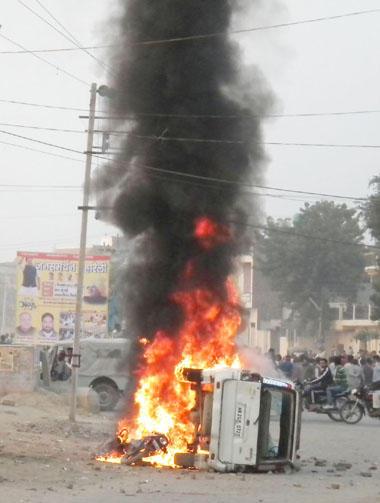 A curfew was imposed by the authorities after the violent clash which seriously injured SGPC member Sant Gurmeet Singh Trilokiwala and others who were returning from a local Gurdwara after a meeting. Sant Trilokiwala was reported to be in critical condition and being treated at a local hospital.

Tensions have been simmering in Sirsa since November 19th when Jasvir Singh and several other Sikhs were attacked and injured by the dera cultists at a nearby town of Jiwan Nagar. Local Sikhs had called for a protest march over the attacks but cancelled it after assurance from authorities that action would be taken against the cultists guilty of the attacks.

After cancelling the protest, the Sikh community members had peacefully assembled at a nearby Gurdwara Sahib on Saturday, and were returning to their homes when they were viciously attacked by a mob of Dera cultists numbering into the thousands.

It is learned that the cultists had intentionally setup a ‘naam-charcha’ program in order to ambush the Sikhs returning from the Gurdwara Sahib. Dozens of Sikhs were injured in this second attack, and several vehicles and motorcycles belonging to the Sikhs were torched and destroyed by the rampaging cultists. 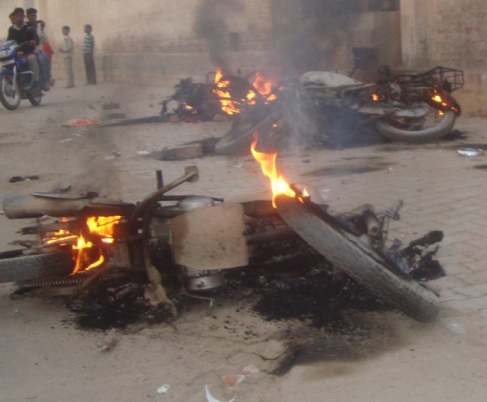 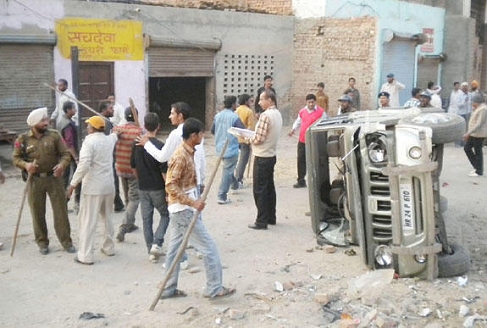 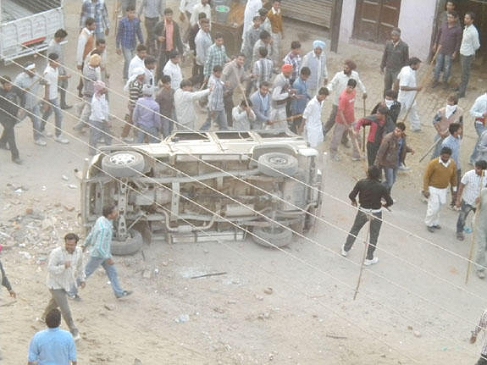 Upon hearing about the attack by the cultists, concerned Sikh community members from nearby areas attempted to assemble at site of the clash, but many were prevented from reaching the venue by the local authorities Fifteen paramilitary units have been called in by the district administration to control the situation, but mobs of “premi” cultists still remained on the streets ready for further confrontation with the Sikhs.

Clashes between the Sikhs and the cultists are now a routine occurrence in Haryana and southern Punjab, and the vigilante security force of Sauda cultist Gurmeet Ram Rahim continuously harass and attack Sikhs who happen to be on route during the passing of the cult leader’s motorcade.

In the past the local police authorities have turned a blind eye against such attacks, and have taken no action again the perpetrators or the dera head who is directly responsible for the cold blooded murders of several others Sikhs including Bhai Harmander Singh, Bhai Balkar Singh and Kanwaljit Singh Ji.

Sender IP identification :44.197.197.23
By clicking on the 'Submit' button, you agree to the following conditions: