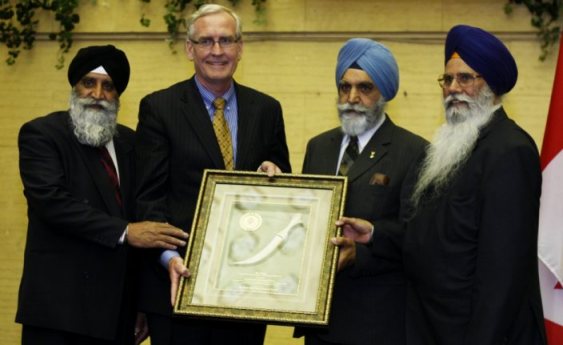 The World Sikh Organization of Canada

OTTAWA, CANADA - The World Sikh Organization of Canada stated that it was saddened and shocked by yesterday's terrorist attacks in Ottawa in which Cpl. Nathan Cirillo, a 24 year old reservist with the Argyll and Sutherland Highlanders regiment lost his life in the shooting at the Ottawa War Memorial.

The attack was stopped in the Parliament Building by Parliament’s Sgt. at Arms, Kevin Vickers and other members of the Canadian security forces.

Stg. Vickers was recognized by the WSO in 2011 for upholding the right of Sikhs to wear kirpans in the Canadian Parliament.

He had told members of the World Sikh Organization of Canada: "I see your wearing of the kirpan, especially in our parliamentary buildings, as exactly that, respecting your dignity. But just as the kirpan issue came before us last winter, we are reminded how vigilant we must be to not only defend but promote the practices, cultures and religions of all peoples.

WSO President Dr. Amritpal Singh Shergill said, “we stand in solidarity with our fellow Canadians in condemning these atrocious attacks. As we commend the quick and courageous action of Sgt. at Arms Kevin Vickers in preventing any further loss of life, we also send our prayers and condolences to the family of Cpl. Nathan Cirillo who lost his life while serving his country.

The response of Canadians of all backgrounds to these attacks has shown that we will not be intimidated or daunted but will instead respond with courage and unity. We will not let this attack divide us. Today, as Sikhs around the world commemorate Bandi Chhor Divas, let us reflect on what part we must play so that that freedom and justice can prevail.”

He spoke publicly last year of how he viewed Canada and his role after he was honoured by Sikhs when he moved to ensure that the community’s sacred kirpan was allowed in Canada’s legislature in the face of a motion by Quebec nationalists calling for its prohibition.

The BC Sikh Gurdwara Council also condemned the attacks and stated, "We stand in solidarity with all our fellow Canadians against these heinous acts and we as a country will come out stronger because of love, understanding and tolerance while simultaneously not falling prey to fear-mongering or identifying a specific race, religion or ethnic group as perpetrators."

"This attack was an attack on all Canadians regardless of our differences in appearance or way of life. It is our hope for a safe, secure, discrimination free and equal Canada that binds us all together. It should be our similarities and hope that shines through in these moments."