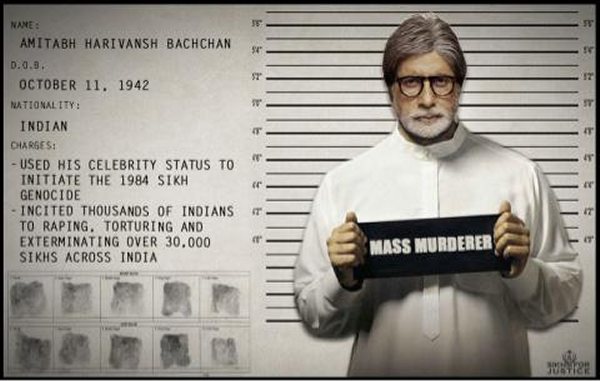 Ghost of 1984 Comes Back To Haunt Indian Movie Star

LOS ANGELES, CA - Bollywood mega star Amitabh Bachchan has been summoned by Los Angeles Federal Court for instigating the 1984 call for violence against the Sikh community. Bachchan is accused of raising “blood for blood” slogan on 31st October 1984 after Indian Prime Minister Indira Gandhi was shot dead by her two bodyguards who happened to be Sikhs.

The plaintiff “Sikhs For Justice” (SFJ) a US human rights group has invoked the jurisdiction of Los Angeles Federal Court as Bachchan has co-starred with Leonardo DiCaprio in the movie “The Great Gatsby”. The movie was produced by a known Hollywood based entertainment company Warner Bros.

As per the Federal Rules of Civil Procedure, Bachchan has 21 days after the service of summons to respond to the charges of human rights violations. “If you failed to respond, judgment by default will be entered against you for relief demanded in the complaint”, warns the October 27 summons issued by the US Federal Court for the Central District of California.

The case has been filed under Alien Torts Statute (ATS) and Torture Victims Protection Act (TVPA) which gives Federal Courts jurisdiction over the human rights violations committed outside the United States.

Hearing defendant Bachchan's call for violence against Sikhs, otherwise shocked and numb crowd immediately reacted violently towards Sikhs present in the crowd and started beating them”.

“For 30 years, Bachchan is thriving on the impunity due to his star status. Indian courts have failed to take cognizance of his crimes against humanity”, stated attorney Gurpatwant Singh Pannun, legal advisor to SFJ. “It is our resolve to hold every1984 perpetrator of violence against Sikhs accountable in international courts irrespective of their celebrity or political status, added attorney Pannun.

On the 30th year of November 1984 genocidal violence against Sikhs, North American Sikhs are holding a rally in front of United Nations Headquarters in New York on November 07. “Rights group will approach Hollywood stars who have taken stand on human rights to support the 1984 victims by condemning Bachchan’s crimes and Sikh community’s quest for justice”, Pannun further added.

Demanding “Jury Trial”, the class action lawsuit against Bachchan seeks compensatory and punitive damages for the victims and declaratory judgment “holding that November 1984 violence against Sikhs was "Genocide" as defined under international laws and laws of the United States”.

The lawsuit against Bachchan has been filed by Sikh rights group along with California based Mohender Singh and Delhi based Babu Singh Dukhiya both of whom lost several members of their family in the 1984 genocidal violence initiated by the slogans raised by Bachchan.