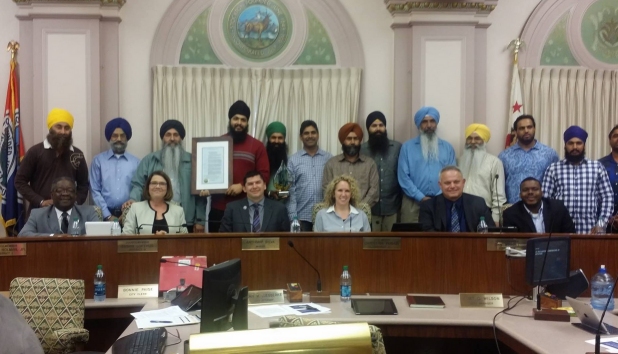 City Officials Praise Contributions of Sikhs in California, and the United States

Stockton, CA, USA - A 30-year-old massacre of Sikhs by the government of India gained fresh attention in California on Tuesday when the City of Stockton, home to the oldest community of Sikhs in the United States, passed a proclamation recognizing the 1984 Sikh Genocide and praising religious liberty.

“We commemorate the 30th anniversary of the 1984 genocide as we recognize the ongoing impact of the genocide for the Sikhs around the world and our city,” said Mayor Anthony Silva in remarks to representatives of Stockton Gurdwara at a March 10 city council meeting. “As the mayor of the city, I want to thank you so much, from the bottom of my heart, on behalf of the Stockton City Council, for the contributions that you have done this community.” Silva and Vice-Mayor Christina Fugazi then jointly presented a framed copy of the proclamation to over a dozen Sikh community leaders.

“Today, we are very proud to be Americans and share our sorrow, our happiness, and our joy with our fellow Americans,” remarked Bhajan Singh as he spoke on behalf of the gurdwara. “In this chaotic world of ours, occasions like today give hope to humanity, and if there is hope, humanity will thrive.” Passionately praising the “moral duty” of city leaders, Singh said Stockton had “bestowed us with dignity by giving us proclamation in which lies hope of humanity.”

Reading from the proclamation, Mayor Silva said: “Sikhs suffered a genocide in June and November of 1984 where thousands died in these attacks, including many innocent pilgrims, many men, women, and children who were solely targeted for belonging to the Sikh faith.” Because the city recognizes the 1984 violence, Silva said, “We uphold religious liberty as paramount to our social need and fundamental principles for a peaceful civilization.”

Manjit Singh Uppal, former president of Stockton Gurdwara, said he was honored to have played a part in producing the proclamation, which acknowledges “the intentional, deliberate, and systematic killing of Sikhs in India during November 1984 genocide.” Uppal stood beside Mike Boparai from the American Punjabi Chamber of Commerce, who was especially pleased the proclamation connects the Sikh genocide with incidents of violence against other minorities, including Christians and Muslims. “The suffering of Sikhs in 1984 set the stage for brutality against minorities all over India, so like even today the national government wants to pass a law banning conversion to a minority religion,” says Boparai.

The proclamation offers a summary of the genocide: “Sikhs suffered a genocide in June 1984, when the Indian government launched a full-scale military invasion of the Sikh Harmandir Sahib (also called the Golden Temple) while thousands of pilgrims thronged the area for an annual Sikh festival; Sikhs suffered another genocide in November 1984, when Sikh communities in the capital of India, New Delhi, and other areas, were systematically targeted for murder by roving bands headed by political party members and members of parliament.”

The City of Stockton’s ties to Sikhs trace back over a century. Founded in 1912, Stockton Gurdwara was the first permanent Sikh-American settlement. Its founders launched the Ghadar Party, a revolutionary group that sparked India’s independence movement. Mentioning this, the city’s proclamation also recognizes the gurdwara as home to the first Asian in U.S. Congress, Dalip Singh Saund, and the first Sikh-American soldier, Bhagat Singh Thind.

Ecstatic over the proclamation’s passage, Bhajan Singh effused after the city council meeting: “The resolution text is a true gem for many reasons. It boldly mentions the June genocide as well as that in November 1984, which I believe is a first. It also talks about similar Muslim and Christian persecution, including mentioning India’s prime minister, Modi, and his oppression of minorities. Additionally, it highlights the Ghadar rebellion sparked by Stockton Sikhs. This resolution should be a benchmark for future efforts.”

A U.S. embassy cable released by Wikileaks in 2011 revealed that the federal government also recognizes the role of the Indian State in the 1984 Sikh Genocide as it denounced “the opportunism and hatred directed by senior GOI [Government of India] officials against Sikhs in 1984.”

Stockton Gurdwara and the American Punjabi Chamber of Commerce recently worked with Organization for Minorities of India to pass a similar recognition in the neighboring City of Tracy.

Proclamation: 1984 Sikh Genocide and Praising the Values of Religious Liberty

Whereas, The United States is home to over 500,000 Sikhs and San Joaquin County is the location of the oldest Sikh-American community, Stockton Gurdwara, which was founded in 1912 and, one year later, the Ghadar Party formed, the first organized and sustained campaign of resistance to the British Empire’s occupation of the Indian subcontinent; and

Whereas, The Sikh-American settlers were inspired by the democratic ideals of the American founding fathers and so pursued integration into their new home country, and Stockton Gurdwara produced the first Sikh-American U.S. Army soldier, Dr. Bhagat Singh Thind, and also the first Asian-American congressman, Dalip Singh Saund; and

Whereas, Sikhs suffered a genocide in June 1984, when the Indian government launched a full-scale military invasion of the Sikh Harmandir Sahib (also called the Golden Temple) while thousands of pilgrims thronged the area for an annual Sikh festival, Sikhs suffered another genocide in November 1984, when Sikh communities in the capital of India, New Delhi, and other areas, were systematically targeted for murder by roving bands headed by political party members and members of parliament, and thousands died in these attacks, including many innocent pilgrims and many men, women, and children who were solely targeted for belonging to the Sikh faith. Today, the Sikh community remembers those events as the “1984 Sikh Genocide”; and

Whereas, A genocide was conducted against Muslims in the State of Gujarat in 2002, the state’s top executive, Narendra Modi, was reported by whistleblowers to have commanded police not to interfere with homicidal mobs formed by his political party. Modi was banned from entering the United States in 2005 on the grounds of egregious religious freedom violations under the International Religious Freedom Act of 1998, the first and only time such denial has been issued. A pogrom was conducted against Christians in the State of Odisha in 2008, in which several dozen were murdered in especially brutal manners; and

Whereas, The USCIRF has annually, since 2009, placed India on its “Watch List” of countries it believes require “close monitoring due to the nature and extent of violations of religious freedom engaged in or tolerated by the Government.” The ruling political party of India has repeatedly declared its interest and intention to pass a national law criminalizing religious conversion without governmental permission. Religious liberty does not exist when a person must declare their religious affiliation to the government or obtain permission to believe or not believe in the religion of their choosing; and

Whereas, We uphold religious liberty as a paramount social need and a fundamental principle for a peaceful civilization. We praise the contributions of Sikhs in California, the United States, and around the world, especially to the struggles for religious liberty and the preservation of civil rights. We remember with sorrow the deaths of innocent Muslims killed in 2002 in the Gujarat Genocide and of innocent Christians killed in 2008 in the Odisha Pogrom. We commemorate the 30th anniversary of the 1984 Sikh Genocide, remember the thousands of innocent Sikhs whose lives were tragically cut short in that event, recognize the ongoing impact of the genocide for Sikhs around the globe, and call for justice.

Now, therefore, I, Anthony Silva, in recognition of the intentional, deliberate, and systematic killing of Sikhs in India during November 1984 genocide, do hereby proclaim March, 2015

In witness whereof, I hereunto set my hand and caused the Seal of the City of Stockton to be affixed this tenth day of the month of March, two-thousand-fifteen