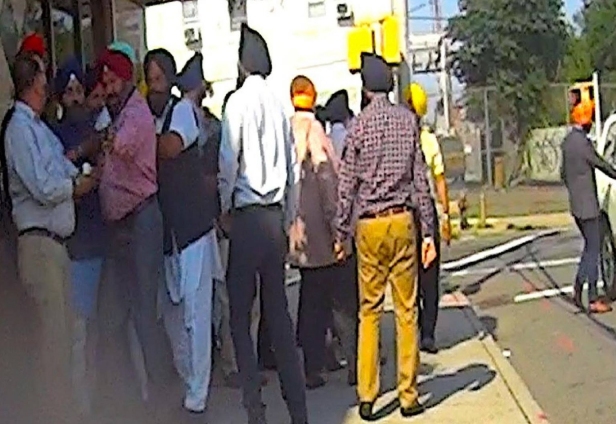 Under Federal rule, DSGMC, President GK has till July 22 to answer US Court Summons. Federal Judge James C. Francis has been assigned to hear the allegations of death threats, illegal detention and physical abuse against Manjit GK, who also heads Delhi Unit of SAD (Badal), a political party that is controlling the State of Punjab.

July 11 witnessed a high pitched chase between SAD (Badal) members headed by Manjinder Sirsa, General Secretary DSGMC and private investigators who were trying to serve GK who was addressing a sparsely attended gathering at “Golden Terrace’ in Richmond Hill.

“I was threatened to be killed and physically harmed by SAD (Badal) leader Sirsa ”
- Jagjeet Singh stated in his complaint filed with 102 Precinct NYPD in Richmond Hill, NY.
A criminal complaint has been lodged with “New York Police Department” (NYPD) on Saturday against “Sirsa” for leading attack against the employees of law firm who were assisting the private investigators in identifying GK.

“I was threatened to be killed and physically harmed by SAD (Badal) leader Sirsa ”, Jagjeet Singh stated in his complaint filed with 102 Precinct NYPD in Richmond Hill, NY.

NYPD opened an investigation against “Sirsa” on the charges of threaten to kill or physically harm someone.

“Sirsa and SAD (Badal) members are under fallacy that they are above law in the United States also as they believe and practice in Delhi and Punjab”, stated Gurpatwant Singh Pannun, legal advisor to SFJ.

“Sirsa used threats of violence and he will be investigated and charged by NYPD as per laws of the United States” added attorney Pannun.

On a complaint filed by Janki Kaur and Harjit Singh, a Federal Court in Manhattan issued summons against GK on the charges of victimizing a 1984 widow and using torture as tool to wrest the control of top Sikh body. July 10 complaint filed by victims under “Torture Victim Protection Act” (TVPA) of 1991 seeks punitive and compensatory damages against DSGMC President